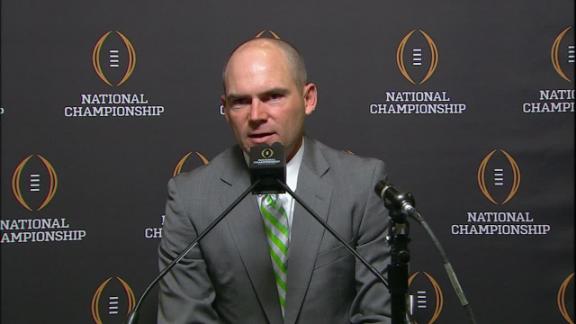 Multiple outlets have reported that Carrington failed an NCAA-sanctioned drug test, although Helfrich would not disclose any details, saying only that the freshman is ineligible.

"It will not be a distraction," Helfrich said Saturday morning during Oregon's media day. "It's a great, great thing to talk about and the only thing that I'll talk about from that standpoint is confirm that it's an NCAA policy that is in play here and he's ineligible for this game, and we'll ride."

Carrington's random drug test was administered in the week before the Rose Bowl, and it took about a week to get the results, a source confirmed to ESPN. According to multiple reports, he tested positive for marijuana.

If marijuana is the reason for Carrington's suspension, it would fall under the NCAA's "street drug" distinction. An athlete who tests positive for "street drugs" is ineligible for "at least the first 50 percent of regular-season contests or dates of competition in the season following the positive test," according to the NCAA.

An Oregon spokesman would not specify how many games Carrington, the Ducks' second-leading receiver, would miss next season.

Helfrich also said that running back Ayele Fordeis ineligible, reportedly also for a failed drug test. Helfrich reiterated, however, that the loss of Carrington would not be a distraction.

The Ducks already are without freshman receiver Devon Allen, who injured his knee on the opening kickoff of the Rose Bowl. Tight end Pharaoh Brown also has been sidelined for several games with a leg injury. The Ducks have had eight different starting offensive lineups in their first 14 games.

"It's just like any other position," Helfrich said. "Again, we've been tested in that realm of guys not being available for whatever reason all season long, and our guys have stepped up."

"It's tough," said Oregon quarterback Marcus Mariota, the reigning Heisman Trophy winner. "[Carrington] is a big playmaker for us. Next guy up."

Helfrich said a number of players will have to step up to replace Carrington, who had 37 catches for 704 yards and four touchdowns.

Carrington had more than 100 receiving yards in each of the Ducks' past two games. He had seven catches for 126 yards with one touchdown in a 51-13 victory over then-No. 8 Arizonain the Pac-12 championship game Dec. 5 -- his first career start -- and then had seven catches for 165 yards with two touchdowns in a 59-20 win over No. 3 Florida Statein the Rose Bowl Game Presented by Northwestern Mutual on New Year's Day.

ESPN's Joe Schad and Mark Schlabach and The Associated Press contributed to this report.

Next Man Up For Oregon
Oregon senior wide receiver Keanon Lowe discusses the impact of losing Darren Carrington for Monday's game against Ohio State and how the Ducks will looks to attack the Buckeyes' defense.