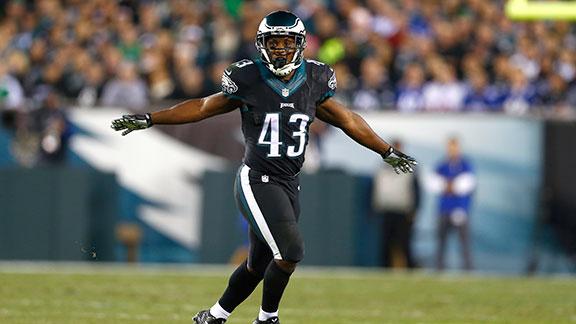 Sproles sprained the medial collateral ligament (MCL) in his left knee, an MRI revealed Monday morning. But the sprain wasn't as serious as it appeared during the game, and Sproles could be back when the Eagles return after their bye week.

"He's got an MCL sprain, so we'll see how long it's going to be," Eagles coach Chip Kelly said Monday. "It could be a week or two. We have a week off, he'll get treatment and we'll assess him when we get back."

Sproles, 31, has been one of the Eagles' most valuable players during their 5-1 start to the season. He has three rushing touchdowns, including a 15-yard sprint against the Giants. Sproles also returned a punt for a touchdown against San Francisco. He is averaging 6.6 yards per carry and has caught 16 passes for 198 yards.

"He's a big-time player," running back LeSean McCoy said. "He makes me better. He takes the load off. He has his own package where he can make plays and gets in his own zone. And special teams, that's another key thing about him. He does that so well."

During the third quarter Sunday, Sproles ran off left tackle. There was a pileup, and Sproles' left knee buckled under him. He stayed down and was helped off the field by the training staff. He did not return.

With Sproles out, the Eagles were down to McCoy as their only healthy running back on the active roster. Tight end Trey Burton got 10 carries in the fourth quarter as the Eagles were trying to run out the clock. Chris Polk, who has had hamstring issues since the preseason, was inactive for the game.

Kelly said the Eagles would make a roster move only if Sproles' knee takes longer to heal than expected.

"We're not playing a game [next weekend]," Kelly said. "We will not make any moves this week during our bye week to solidify our team for the bye."