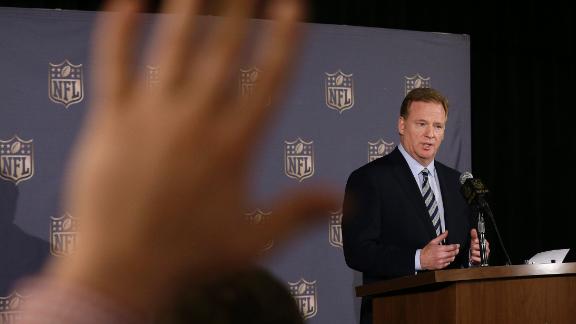 A Pro Football Hall of Fame policy will prevent members of Junior Seau's family from speaking at the deceased linebacker's induction ceremony in August.

Seau's daughter, Sydney, was listed as a presenter on her father's behalf in a Hall of Fame news release sent July 15. However, she will be commenting only on a video when her late father enters the Hall of Fame on Aug. 8.

The Hall of Fame said in a statement that is consistent with its policy concerning the induction of deceased players.

"The policy of the Pro Football Hall of Fame since 2010 regarding individuals enshrined posthumously provides for an expanded presenting video (longer than the videos of living inductees) followed by the traditional unveiling of the bronzed bust and no additional comments made from the podium," the statement said.

"This policy is not precedent setting and was implemented for the first time in 2011 when former Los Angeles Rams great Les Richter was inducted posthumously."

In the case of the Seaus, the policy fosters heightened sensitivity because of Seau's suicide in 2012 at age 43. After his death, he was diagnosed with chronic traumatic encephalopathy, or CTE, a neurodegenerative disease that has been found in the brains of dozens of deceased NFL players due to repeated head trauma.

"It's frustrating because the induction is for my father and for the other players, but then to not be able to speak, it's painful," Sydney Seau told The New York Times, which earlier reported the story Friday. "I just want to give the speech he would have given. It wasn't going to be about this mess. My speech was solely about him."

The video presentation will last about five minutes, longer than the usual videos by about two minutes, the Hall said. And Sydney Seau will make remarks in that video.

Seau's family filed a wrongful death lawsuit against the NFL in 2013 alleging that the league concealed the dangers of football-related head trauma over a period of several years.

Joe Horrigan, spokesperson for the Pro Football Hall of Fame, told the Times that in the past, for deceased inductees, what presenters said repeated what was in the video, and so a few years ago the Hall eliminated speeches in these cases.

"There was an acceptance speech for deceased players but it got redundant," Horrigan told the Times. "The honor is supposed to be for the individual."

Seau played 20 seasons for three teams, was voted to the Pro Bowl 12 times and was named first-team All-Pro eight times. Seau played in 268 games, the second-most of any linebacker in NFL history. He finished with 1,522 tackles, 56.5 sacks and 18 interceptions.

Seau played in two Super Bowls, including the Chargers' only Super Bowl appearance in franchise history. He was named to the 1990s All-Decade team by the Pro Football Hall of Fame. Seau was inducted into the Chargers Hall of Fame in 2011.

"We're not the NFL, but the Pro Football Hall of Fame," David Baker, the executive director of the Hall of Fame, told the Times. "Our mission is to honor the heroes of the game, and Junior is a hero of the game. We're going to celebrate his life, not the death and other issues."