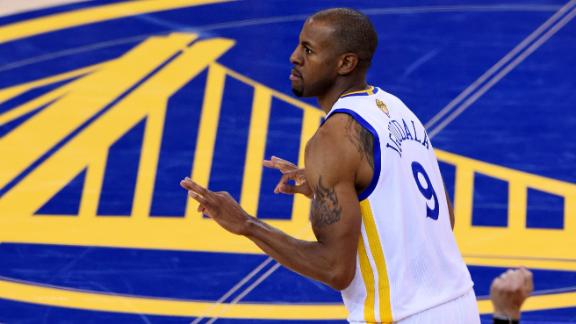 Coach David Blatt said Timofey Mozgov's role reversal in Sunday night's Game 5 was simply a matter of flow -- and wasn't personal -- after the Cleveland Cavaliers center went from a shooting star in the NBA Finals to an also-ran in the span of a game.

Mozgov played only nine minutes in Cleveland's 104-91 loss, which gave the Cavs a 3-2 deficit in the series with the Golden State Warriors.

"It's no disrespect to anyone, certainly not to Timo, who has done a great job for us," said Blatt, asked repeatedly after the game about his reasoning on Mozgov's minutes. "That's just the way that we played it tonight, and Timo will be back and he will not lose his way or lose his head just because he didn't play a lot tonight."

Mozgov's diminished output came three days after a 28-point, 10-rebound performance in Thursday's 103-82 loss, a game in which LeBron James struggled and Mozgov led the team in scoring.

"Did I make a mistake? Listen, when you're coaching a game, you've got to make decisions," Blatt said Sunday. "I felt that the best chance for us to stay in the game and to have a chance to win was to play it the way that we played it."

After Cleveland fell behind 8-2 in the first quarter, the 7-foot Mozgov was replaced with the 6-6 J.R. Smith as Blatt countered the Warriors' small lineup.

Smith came out hot, hitting four 3-pointers, but cooled off and was held scoreless in the second half, finishing with 14 points.

Mozgov missed the one shot he took.

"He'll be back playing like he always can, I'm sure, because he's got character and he doesn't listen to a lot of you guys," a smiling Blatt said of reporters.