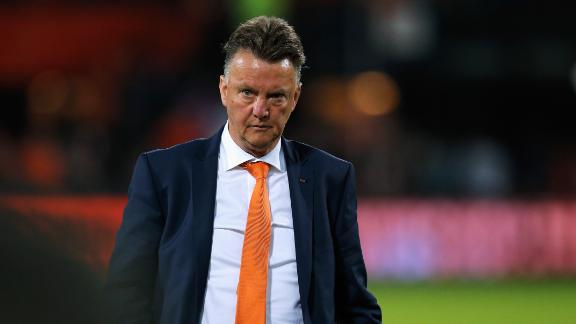 - Okwonga: How good can Danny Welbeck be?

The goalkeeper is set to be on the Spain bench on Friday when Van Gaal manages Netherlands in a rematch of the 2010 World Cup final.

But United's Player of the Year will be in the 62-year-old's squad next season when he takes up his duties at Old Trafford as the successor to the sacked David Moyes.

De Gea told Marca: "He is a manager who has won everything. A very good coach who I believe will bring many things to Manchester United, important and innovative things. I believe that will be very good for us. He will help us a lot because he will bring a different style of play."

He said at a news conference: "You can't just focus monotonously on the World Cup, so perhaps Manchester United was a good distraction. You can't be fully focused on football for five weeks."

Spain midfielder Xavi was given his Barcelona debut by Van Gaal and remains an admirer of the former Ajax and Bayern Munich manager.

He explained: "I have an extraordinary memory of him. He was almost my first coach as a professional. He always talked face to face, was very good to me and treated me well. He believed a lot in me. He fits his style to the players he has."

Van Gaal has switched to a 5-3-2 formation with Holland and Xavi thinks it will help bring the best from Robin van Persie, Arjen Robben and Wesley Sneijder.

He said: "They have three players with a lot of quality up front, and Sneijder who can play a pass. Then he has five at the back, with two shuttlers."