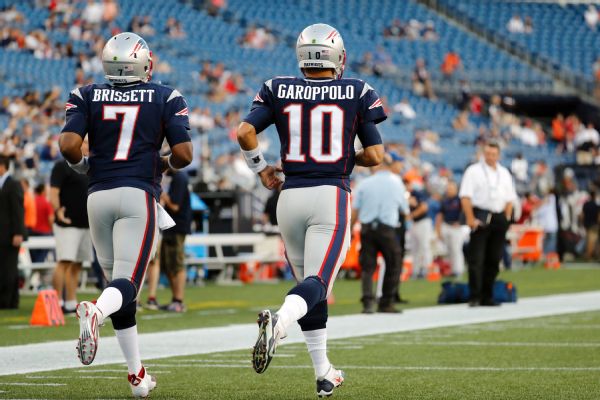 Kickoff at Gillette Stadium is set for 1 p.m. ET.

Garoppolo, who sprained the AC joint in his right throwing shoulder Sept. 18 against the Miami Dolphins, was limited in practice all week and is officially listed as questionable for the game.

Brissett filled in as the starter for Garoppolo on Sept. 22 against the Houston Texans and injured the thumb on his right throwing hand but played through it. He was limited in practice all week and also is listed as questionable, although his injury isn't considered as serious as Garoppolo's.

They are the only quarterbacks on the Patriots' 53-man roster until Tom Brady returns Monday from a four-game suspension stemming from Deflategate.

On Wednesday, Garoppolo said that he was improving, and reporters saw him during practice that day throwing light passes about 25 yards down the field. That same day, Brissett downplayed his thumb injury by saying, "I played with it, so it was fine. I didn't think about it. Whatever it is you have, you just go out and deal with it."