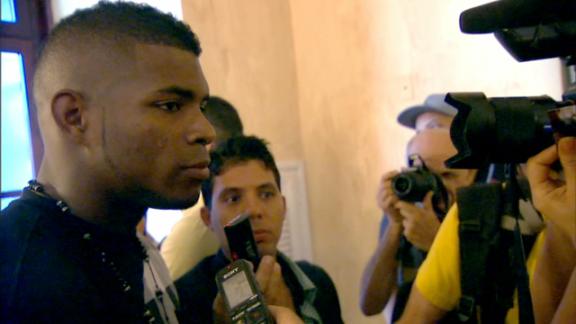 HAVANA -- A lineup of Cuban-born baseball stars, including some of the most famous defectors in recent memory, made a triumphant return to the island Tuesday as part of the first Major League Baseball trip here since 1999.

Once the object of official disdain in Cuba for leaving the country illegally, Los Angeles Dodgers outfielder Yasiel Puig, St. Louis Cardinals catcher Brayan Pena, and first baseman Jose Abreu and shortstop Alexei Ramirez of the Chicago White Sox were swarmed by fans and members of the state media in the lobby of Havana's soaring Hotel Nacional at the start of a three-day mission meant to warm relations between MLB and Cuba.

The major leagues and Cuban baseball have been moving quickly to rebuild ties since Presidents Barack Obama and Raul Castro declared a year ago Thursday that they would re-establish diplomatic relations. The official return of baseball defectors earning millions in the major leagues was a landmark in the new relationship and a dramatic manifestation of Cuba's shifting attitude toward the hundreds of players who have abandoned the country that trained them.

Puig, who fled to Mexico in a smuggler's fast-boat in 2012 and then crossed the border to Texas, wrapped his childhood coach Juan Arechavaleta in a bear-hug, resting the side of his face atop the smaller man's head.

"I'm very happy to be here," said Puig, who signed a seven-year, $42 million contract and was barred from returning to Cuba until he was granted special permission for this week's trip.

Pena, who is from Havana, was met by at least 20 family members. They laughed at stories of the catcher's life in America and handed him the phone to talk to relatives who hadn't been able to make it to the hotel.

The players will hold two days of youth clinics while league and Major League Baseball Players Association executives talk business with their Cuban counterparts, including former President Fidel Castro's son Tony, who is one of the most powerful men in Cuban baseball.

League officials said they were optimistic about sealing a deal by early next year for the Tampa Bay Rays to play two spring training games in Cuba. They also hope to make progress in one day creating a legal route for Cuban players to make their way to the major leagues.

"It's the goal of our commissioner and our owners to ultimately negotiate with the Cuban Baseball Federation, and with the cooperation of the U.S. government and the Cuban government, a safe and legal path for Cuban baseball players who desire to play Major League Baseball to reach the major leagues," Dan Halem, MLB's top lawyer, told a press conference covered by what appeared to be every state newspaper, radio and television station in Cuba.

Peter Bjarkman, author of the upcoming book "Cuba's Baseball Defectors: The Inside Story," said that he had counted 102 national-level players who had left Cuba this year, nearly a third of all those who have departed since 1980. The departures are part of a broader wave of Cuban emigration sparked by the fear that the U.S. will cancel special Cold War-era privileges for Cubans as part of the new relationship with the island.

"I got the distinct impression that right now the Cubans have absolutely no idea of what they're going to do. They're in total chaos in this right now," said Bjarkman, who spent much of the fall in Cuba speaking with people involved in the country's baseball league.

Cuban television avoids games featuring defectors but fans watch their idols' performances on pirated recordings distributed on computer USB drives. Most experts agree that the future does not look bright without a solution to the problem of talent fleeing the country. But a group of fans who gathered in the lobby of the Nacional said the defectors' return to Cuba filled them with optimism.

"I see it as a big step forward in baseball in general," said Gustavo Fernandez, a 21-year-old sculptor. "I think we'll see better facilities here, players' contracts with other leagues, particularly relations with Major League Baseball."

U.S. teams played spring training games in Cuba before Castro's revolution but none appeared here from March 1959 until the Baltimore Orioles faced Cuba's national team in Havana in March 1999. MLB has not returned since.

Under Castro, a passionate baseball fan who saw sports as an expression of national glory, defectors were banished from official memory, never mentioned on Cuban television even as they made headlines on U.S. sports pages.

Castro's brother and successor, President Raul Castro, has eased the treatment of players who leave as part of a broader easing of social controls. That included the 2013 removal of a required exit permit for all Cubans, except those considered essential to the country.

Some major league players have since been allowed back on low-key trips to see family. A few others, like star infielder Yoan Moncada, have received permission from Cuban authorities to depart legally to start careers in the United States. Moncada won a $31.5 million signing bonus with the Boston Red Sox in March.

Cuba also has been allowing some stars to legally play in countries such as Japan and Mexico during the offseason. Similar policies for the major leagues would be far more difficult due to the U.S. trade embargo on Cuba and Cuban fears that broad legalization of departures to the U.S. would make the talent drain even worse. 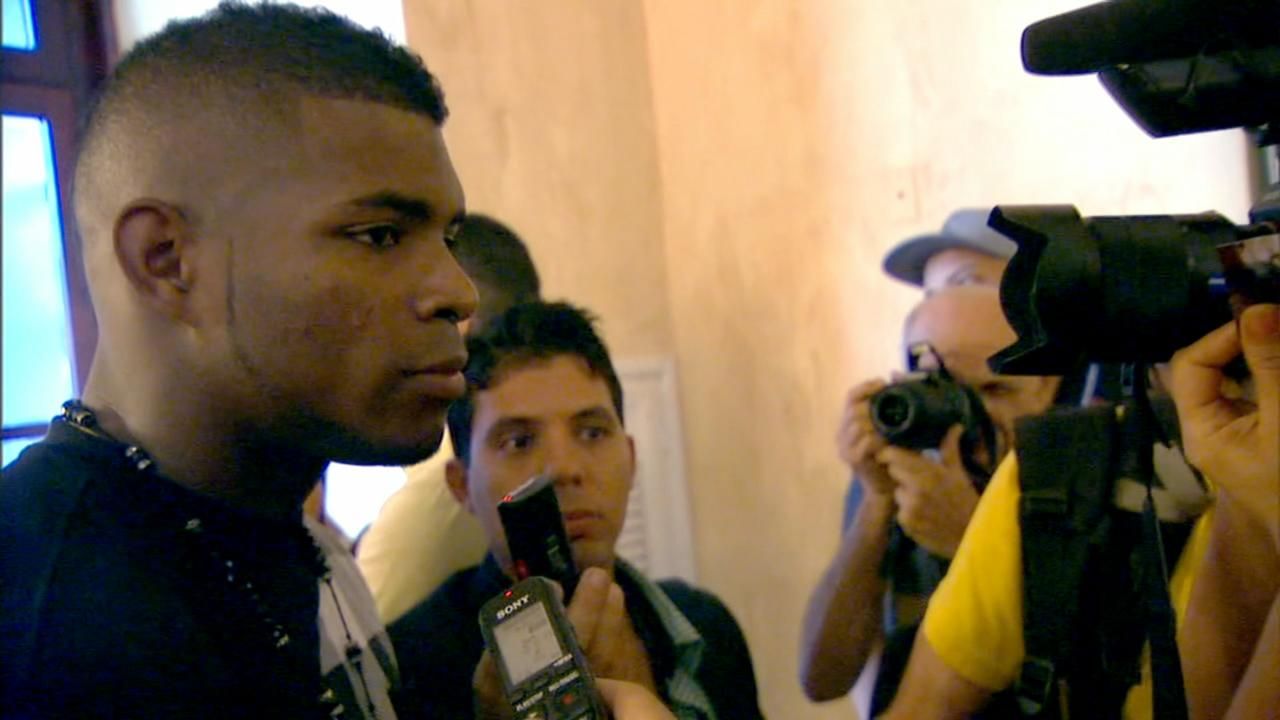