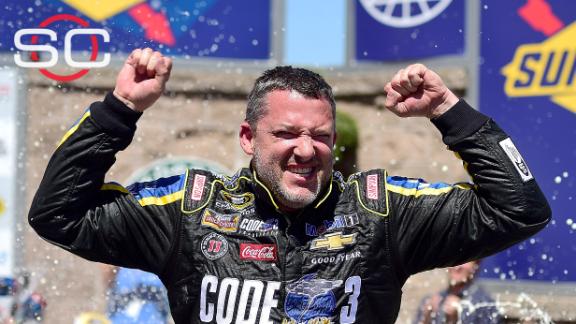 DAYTONA BEACH, Fla. - Denny Hamlin reiterated Thursday that he made a mistake on the final lap Sunday and did not let Tony Stewart win the Sprint Cup Series race at Sonoma Raceway.

Stewart led going into the final lap, and Hamlin passed him when Stewart made a mistake in Turn 7. As they raced to the final turn (Turn 11), Hamlin had a lead of about three car lengths but overshot the corner, swinging wide and opening the door for Stewart to pass him on the inside.

The two banged doors, but Stewart easily made the pass and won, snapping an 84-race winless streak and all but securing a spot in the Chase for the Sprint Cup in his final season. It was a storybook ending, and some fans vented on social media that it was too storybook and that Hamlin did Stewart a solid.

"I didn't let Tony win," Hamlin said Thursday at Daytona International Speedway. "I made a mistake. I didn't execute very good. ... He had an opportunity, he took it. If I'm in his situation, I'd probably do it the same. My biggest mistake, I feel like, is not recognizing the gap that I had behind me.

"I don't know whether Tony would have got there or not. I felt that it would have been very close if he really wanted to carry the car down there whether he still would have gotten to me or not. But I still needed to execute to make him make that decision. Instead, I kind of made the decision for him."

Hamlin said the fact he had not won a road-course race probably impacted his ability to close out the win.

"In my defense - which I still should not make mistakes - is I've never been in that position before," Hamlin said. "I've not been that competitive on road courses. I didn't know the proper defensive move going into the last corner.

"I'd love to have that situation back again. But I really just didn't know the proper move. I thought I had two car-lengths. Looking back at the video, I probably had three and that is kind of the point you can just run your own corner and maybe be OK. I knew he was going to throw caution to the wind, I literally looked up and went to my same braking point and I wheel-hopped again. ... I just made a mistake being in a position I've never been in before."