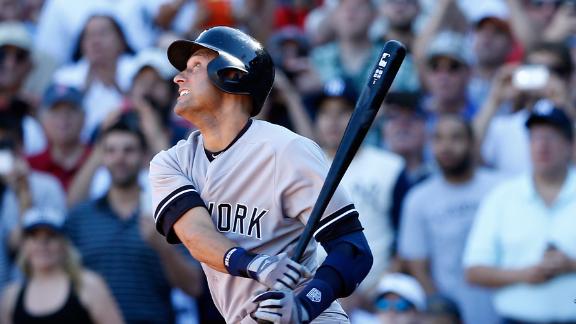 BOSTON -- When Derek Jeter was pinch-hit for in the fifth inning Saturday, Fenway Park was filled with boos. Later -- and despite knowing rules prevented him from doing so -- the fans chanted, "We want Jeter! We want Jeter!"

On Sunday, the fans at Fenway Park will get Jeter again. He said he will serve as the designated hitter during the final game of his career.

"Yup," Jeter said when asked if he will play Sunday in his only postgame comment following theYankees' 10-4 loss to theRed Sox on Saturday.

Jeter went 1 for 2 on Saturday. He reached in the third inning, legging out an infield single. He appeared to move gingerly after the hit, but remained in the game.

Joe Girardi said Jeter told him he only wanted two at-bats Saturday. The Yankees manager also said he didn't think there was anything wrong with Jeter's legs.

"I don't think so," Girardi said. "I think he had to run extremely hard and he had to stretch. He probably felt it a little bit in his hamstring, but he didn't say he was injured, but we'll see."

In his final days as a Yankee, Girardi has made Jeter his own boss.

"Whatever he tells me," Girardi said. "He told me two at-bats today, so that's what I did."

There is no word on how many at-bats Jeter will take Sunday. Girardi may find the right moment to lift him from the game. When he does, it will hit Girardi that Jeter's career will be officially over.

"There is sadness for me," Girardi said. "You never want to see great players leave."

Red Sox president Larry Lucchino said earlier this week that the team has planned a "low-key" ceremony for the Yankees captain Sunday.