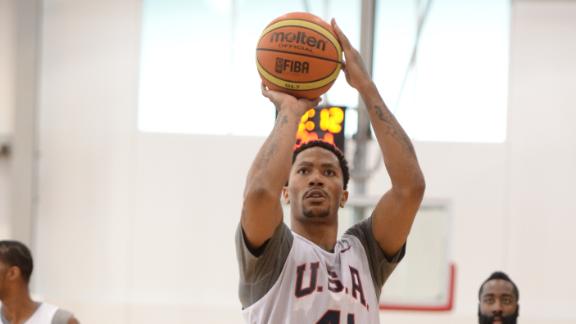 LAS VEGAS -- Chicago Bulls point guard Derrick Rose continued to open eyes Tuesday in Team USA's training camp as he makes his way back from the torn meniscus in his right knee that cost him all but 10 games of the past season.

Rose, who has played in just 49 games over the past three seasons because of various injuries, including two severe knee injuries, earned praise from all corners of the Mendenhall Center on UNLV's campus.

"That's my biggest surprise coming in here," Syracuse coach and Team USA assistant Jim Boeheim told ESPNChicago.com, in reference to Rose's performance. "The one thing I was worried about is whether he would be able to step in after so much time [off]. He looks, to me, as good as when we had him in the world championship in '10, when he was at full strength coming [into] an MVP year. He looks very, very good. Obviously, [when] he gets in some games, it will be a little different, but it's not like he hasn't had success in games. He had a lot of success.

"He's been the most impressive guy here."

In just two days, Rose seems to have reminded the basketball world just how talented he can be when he's healthy.

"He was phenomenal [Monday], and he was today, too," Krzyzewski said. "He hasn't held anything back. The neat thing about today was we went hard [Monday] and we went hard today, and he hasn't been in this [practice] environment, and he was as good or better today."

The thing that has impressed Krzyzewski most is the way Rose has attacked the competition. The former MVP is trying to be one of the 12 players who will make up Team USA at the FIBA Basketball World Cup in late August in Spain.

"He's gone after people," Krzyzewski said. "[Shying away from contact] ain't happening. He's going after everybody, and he's really going hard. His movement on defense has been spectacular. When we started practice [Monday], what he did defensively -- whoa. It picked everybody up. You don't play that type of defense in the NBA because you have to play 40 minutes and 100 games, but here if you play 20 minutes, that's a lot, but you don't have to play consecutively, so you can go to an extreme -- that's what he's doing. I think he's shown he has great balance and strength. He's stronger, and he has better balance, and he's shooting the ball great. I think he's been absolutely terrific these first two days."

For his part, Rose maintains he isn't surprised by his performance. He points to the work he has put into his rehab over the past eight months as the reason he is playing so well early on.

"I can be more aggressive, but I'm picking and choosing [and] just trying to see what the game needs," he said. "Just trying to play my type of game. I think when I first came in the league people were wondering if I could score, but on my team, I have to score. Here I can be really a point guard and really get guys in a groove and really get them in a rhythm to shoot the ball. So my job is to play defense, move the ball up the court and get guys open and shoot open shots."

Rose's teammates can see his game is starting to return as well. Team USA counterpart Kevin Durant believes Rose is a better player than he was during the 2010 world championships, when the pair helped the team win a gold medal.

"He's definitely grown since then," Durant said. "[He] has blossomed into a superstar, [and] MVP of course after that. He's just had a few setbacks with some injuries, but he seems like he's the same player. But his confidence -- that's what it's about in this league. You experience things, you go through them, you gain confidence, and that's what all these guys here have gotten."

Boeheim said people have to be a little surprised at how well Rose has played to start camp.

"They know Derrick's talent," Boeheim said. "You have to be a little surprised at seeing what he's doing. He's looked great. And I'm happy for him because my experience with him in '10 was great and he's just a great kid. A great kid to coach being part of the world championship team. I'm happy to see a kid come back. All the rehab, all the work -- people don't realize how hard that is. That's not easy. And to see Derrick Rose back, I think it's a great thing, and it will be great for Chicago."

Rose is trying to take all the extra attention in stride. He knows the eyes of the basketball world are focused on him this week, but he doesn't seem too concerned. He joked that the biggest key from Monday to Tuesday was that he had no pain, just the regular soreness that comes for every basketball player after participating in five-on-five full-court scrimmages.

"Waking up not sore, man," he said with a smile. "Waking up kinda sore. I feel like a basketball player now, man. I'm happy to be here and happy to be getting attention, but at the same time, I know that I have a long journey and [I'm] just trying to take it one day at a time."