Derrick Rose out of U.S. exhibition 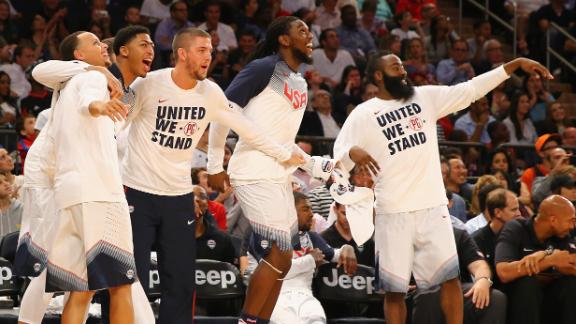 Rose was scheduled to play Wednesday despite sitting out practices Monday and Tuesday to rest his sore knees after making his return to a game for the first time in eight months Saturday night in an exhibition victory over Brazil in Chicago.

One source familiar with Team USA's plans told ESPN.com that coach Mike Krzyzewski decided to hold Rose out of the Dominican Republic game to make more minutes available for players vying for one of the squad's last few roster spots as final cuts approach.

Bulls coach Tom Thibodeau, who is serving this summer as one of Krzyzewski's Team USA assistants, confirmed that after Wednesday's game, saying of Rose: "He's fine. He's just getting another day of rest. We gave him a couple days after the game Saturday in Chicago, and he didn't practice yesterday, so we thought the best thing to do would be to give him another day because we wanted to look at some other players today anyway."

Rose participated in shootaround Wednesday morning and, according to one source present, moved "well" throughout the session after sitting out the last two practices.

He was also in uniform for Wednesday night's game, watching from the Team USA bench after going through pregame layup lines. Fans at MSG began chanting for Rose midway through the second quarter, presumably unaware that he would not be playing.

Team USA officials have insisted all week that they are merely treating Rose with the utmost caution after surgeries on both knees limited him to just 10 games over the past two seasons.

But a source familiar with Rose's condition told ESPNChicago.com's Nick Friedell on Tuesday that the 25-year-old has been bothered by knee soreness since his return to the floor against Brazil and requested extra time to recover.

Rose denied after the game that his knees, specifically, were sore, instead characterizing it as "body fatigue."

Both Rose and DeMarcus Cousins (bruised knee) were expected to play against the Dominican team, but only Cousins returned to the lineup to face a team led by NBA veteran Francisco Garcia, with Atlanta Hawks and Dominican teammate Al Horford still recovering from last season's torn pectoral.

"This was a good time for him to get rest," Colangelo said Tuesday of Rose. "He still thinks he needs a little bit of rest."

Rose tore the ACL in his left knee in April 2012 and the medial meniscus in his right knee in November 2013. Saturday marked his first game since the latter injury, with Rose totaling seven points in 24 minutes in Team USA's comfortable victory at the United Center.

Asked about playing Wednesday night, Rose said the previous day: "Hopefully I am. I didn't do anything today. I just got treatment and today is just really another rest day. I'm really, really happy with where I am right now as far as health-wise. I'm just trying to take my time and get rest. We have a long schedule ahead of us, and I'm just trying to get as much rest as possible."

Said Colangelo: "For him right now, you have to just weigh all the sensitivities involved ... the physical part, the mental part. He did play 24 minutes (Saturday) and he hadn't played that (many minutes) in a long time. If we have time where he can have some down time, mentally it's good for him."

Rose is one of five projected starters for Team USA's upcoming trip to the FIBA World Cup in Spain alongside Stephen Curry, James Harden, Kenneth Faried and Anthony Davis. The Americans open group play in Bilbao with an Aug. 30 game against Finland.

After a wave of unexpected exits by star players (Kevin Durant, Kevin Love, Blake Griffin, LaMarcus Aldridge and Russell Westbrook) and the devastating leg injury suffered Aug. 1 by Paul George, Rose ranks as one of the most experienced international players on the squad, having played a key role on the 2010 Team USA squad which won the FIBA World Championship in Turkey.

Krzyzewski, though, insisted Tuesday that he's not planning to heap leadership responsibilities on Rose at this early stage of his comeback.

"He needs to keep finding himself and his rhythm and not be worried about leading a team," Krzyzewski said. "Harden and Curry are really good with that. But Derrick has done a good job."