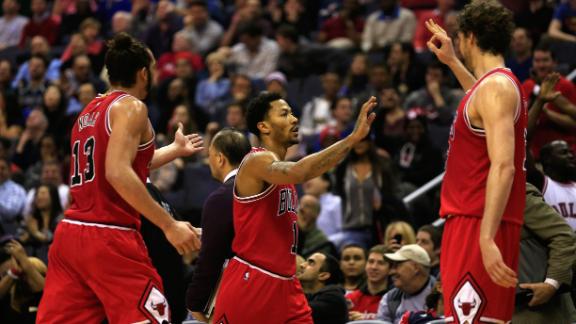 Rose, who admitted he was left "kinda speechless" by the fact that the Bulls did not qualify for the playoffs for the first time since the 2007-08 season, said he would sit out after dealing with myriad injuries throughout the year. Rose missed most of training camp after fracturing his left orbital bone in the team's first official practice of the year. Most recently, he was dealing with an elbow injury, but he also nursed groin, knee, hamstring, adductor and back injuries this season. Still, he seems pleased with the way his season turned out.

"I think I played all right," Rose said. "I think that I did what I was supposed to do, play in as many games as possible [66]. I love the way I played. It's a good place to start. Next year, just try to keep getting better and keep improving my game."

Gasol, who is expected to opt out of the final year of his contract this summer, has been dealing with right knee swelling for almost a month and will not see any more time after playing in 72 games this year.

"Pau will not play these last two games," Bulls head coach Fred Hoiberg said. "I'm not sure people realize the full extent of Pau and how he's been playing through this knee injury. Every game, his knee blows up and you have to get him back, manage the swelling, so we'll get an MRI on Pau [Tuesday] and see how he's doing."

Gibson has been dealing with a rib fracture for the past couple of weeks and has been out since leaving a March 29 win over the Indiana Pacers.

Moore has been out since April 5 as he continues to deal with a hamstring injury that knocked him out of seven games at the end of March.

One player who will play against the New Orleans Pelicans on Monday night is All-Star swingman Jimmy Butler. He missed a month of action from Feb. 6 to March 6 because of a left-knee injury. He missed two more games later that month after being checked out by renowned orthopedic surgeon Dr. James Andrews. Butler, who signed a five-year max extension worth over $90 million last summer, tried to shoulder a lot of the blame.

"I think that a lot of this season I put on myself," Butler said. "Because I feel like I could have done more. It's a learning curve for everybody, especially for myself. Very humbling, to tell you the truth. Whenever you think you're good enough or you can do this, something like this happens." Butler did not want to answer a question regarding whether he and Rose could coexist in the future. The pair has struggled to find chemistry on the floor together all year.

Butler did not fly with the team to New Orleans on Sunday for Monday night's game. One source with the Bulls said Sunday that Butler had a family commitment and would fly to New Orleans later Sunday night. Hoiberg said Monday that the absence was excused.

Coaches and players were palpably disappointed Monday with their season, which began with championship expectations.

"It's incredibly disappointing to find ourselves in this position, in this situation," Hoiberg said. "Looking back on the season, a lot of things contributed to us being in that spot that we're in right now. Not taking advantage of a favorable schedule, not closing out games when we had great opportunities to do that. You look at our West Coast swing, when we, very easily on that seven-game trip, we could have been 5-2. We ended up 2-5 because we didn't close things out. The first person I'm looking at in this whole situation is me. And I got to be better. I got to get our guys to go out and play more consistent basketball. It will be a long summer, a long offseason. Hopefully we'll come out prepared in the fall and learn from some of the things that happened this year and be better."

Rose, who has one more year remaining on his max contract, still thinks the Bulls can compete with the game's elite.

"I still believe that we could win a championship," Rose said. "It's just that this year, we really can't put a finger on what really happened. We let things slip a little bit too early and it kind of followed us throughout the entire year. So next year we can have a chance. We got to come in, and this should be fuel to go in the offseason and really work on our game and come back with revenge on our minds."