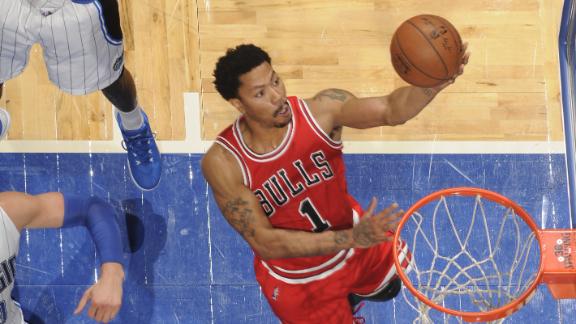 
Rose scored nine points in 19 minutes and showed the flashes of aggression that the Bulls were hoping to see. The former MVP looked understandably rusty, going just 3-for-9 from the field and shooting 1-for-6 on 3-pointers.

After it was over, Rose acknowledged that he felt "good" being back on the floor with his teammates, but was disappointed they couldn't get a win against a non-playoff team in the Magic.


"I'm just happy to be playing," Rose said. "It's not one thing. The shots I put up, I felt they were good shots, hard shots, and I'm more concerned with us losing more than anything.''


The good news for the Bulls and for Rose is that he said he didn't feel any discomfort in his surgically repaired right knee.


"I felt good," Rose said. "I didn't feel any discomfort at all, so that's a good sign. Now I have to see how tomorrow is.''


Rose entered the game shooting just 28.7 percent from the 3-point line and once again settled for too many attempts behind the arc, but he looked aggressive in short spurts and seemed to be moving well.


"I thought the first quarter was very good," Bulls head coach Tom Thibodeau said of Rose's performance. "I thought he got a little winded, [that's] to be expected, but it gives us a baseline and we can go from there. ... I think he's been out a long time so he's got to get that rhythm. I think the more he plays, the better it will be."


Thibodeau said before the game that Rose would play about 20 minutes and he stuck to that plan. Rose sat the entire fourth quarter and admitted that it was tough for him to watch as his teammates allowed what had been a 15-point lead in the first half slip away.


"Very hard," Rose said of watching from the bench. "Very hard, but at the same time it's all about patience. I know that I'm going to have my time. Right now, while I'm not playing, I'm trying to learn a little bit more, see what's open and seeing how they're playing everybody. The only thing I can do is sit back, watch, and learn.''


Rose remains hopeful that he will be able to play Thursday night against the Miami Heat in the back end of a back-to-back. The Bulls only have four regular-season games remaining and have slid into the fourth spot in the Eastern Conference standings. The Toronto Raptors have the tiebreaker by virtue of their Atlantic Division championship.


"I think that's the plan," Rose said of playing against the Heat. "I know that I'm feeling good. Tomorrow, see how it feels and try and give it a go.''


As angry and frustrated as the Bulls felt after the game, the realization that Rose was on his way back did give a boost to his teammates. Bulls stars Jimmy Butler and Nikola Mirotic came over to give Rose some praise and encouragement after being taken out of the game about midway through the first quarter.


"It was good. It was positive," Bulls big man Pau Gasol said of Rose's play. "Him being out there is a positive for us. Obviously, we knew he wasn't going to be very sharp, but I think he was able to play and go up and down and play limited minutes, but [he] still had confidence. And that's what he needs to continue to do, continue to build confidence in himself, get in a better rhythm, get in better shape, so we can be more effective."