Dez Bryant gets into camp fight with CB Tyler Patmon 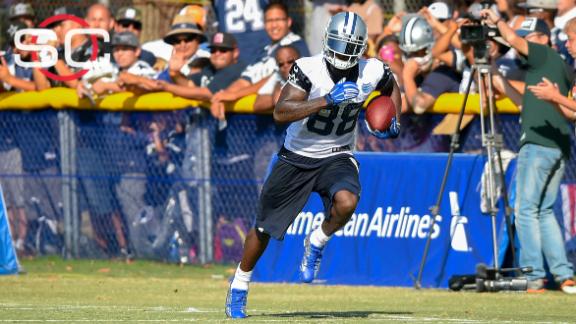 OXNARD, Calif. --Dallas Cowboys coach Jason Garrett has issued players T-shirts and sweatshirts with the word, "fight," on them.

Bryant and Patmon got engaged on the final play of team drills for the first-team offense and defense. Bryant's helmet came off as he sprinted off the line of scrimmage and then Patmon's helmet was off. Patmon got a quick punch on Bryant before the receiver came back at him.

Bryant said he got a "little overheated" with the fellow former Oklahoma State player.

What made the incident different was how Bryant kept going at Patmon well after the play as the third-team offense and defense worked through the final eight plays of practice.

A number of different teammates on both sides of the ball, coaches and other personnel unsuccessfully attempted to keep Bryant away.

At one point he appeared to throw his mouth piece at Patmon and later took a swipe at him.

It wasn't until Tony Romo walked over that Bryant started to move back toward the offense. Several fans booed and yelled at Bryant as well.

After practice Garrett spoke with Bryant. Bryant talked to a number of the personnel who tried to stop him in the heat of the action as well. Patmon went through a normal postpractice routine of catching passes before he was besieged by media.

"Oh, man, it's just brothers," Patmon said. "Brothers fight. It's just what happens sometimes. So we go out at, we squashed and it's over."

After returning to the field of his own accord to speak to the media, Bryant said he liked Patmon's reaction.

"You don't want somebody weak on your team," Bryant said. "That's why Patmon, he was undrafted and he's fighting his way. And he's fighting for respect and he got mine. I'll go to war with a guy like that any day of the week."

While it was the first fight of camp, it likely won't be the last.

"It's going on with 31 other teams, too," tight end Jason Witten said. "It's competition. You go through it and you get it worked out in the locker room and it's all fine. You guys are acting like a bunch of kids at the circus trying to get it. I mean, it's training camp. We all got a shirt that says 'Fight.'

"Competition, that's what it's all about," Witten added. "Nobody competes more the Dez Bryant."

Cowboys owner and general manager Jerry Jones said the fight provided a scene he wasn't sure "could've been scripted any better."

"This was our second day of having this crowd out here," Jones said. "And the kind of atmosphere that everybody's worked to put together, and that atmosphere breeds that kind of passion, that kind of excitement, and sure enough here comes some little after-the-whistle action. ... That's good stuff. That's training camp.

"Now that's not new," Jones said. "That's been happening in our training camp for years and year and years. It is a throwback to the years you saw Michael Irvin and Deion (Sanders) and those guys."