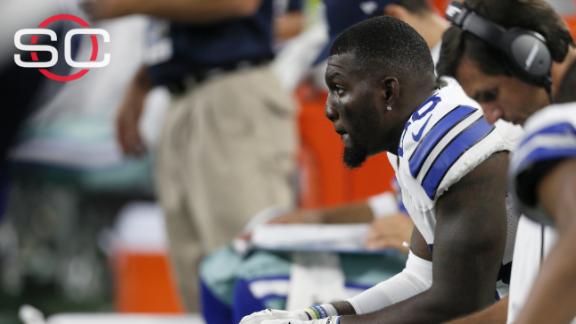 IRVING, Texas -- Dallas Cowboys wide receiver Dez Bryant had surgery Monday to repair what a source said was a broken fifth metatarsal in his right foot.

Bryant said via Twitter that the procedure "went great."

Cowboys coach Jason Garrett pegged Bryant's recovery time at four to six weeks, which could keep him out until the Oct. 26 rematch with theNew York Giantsor the Nov. 1 meeting with the Seattle Seahawks at AT&T Stadium. A source told ESPN's Chris Mortensen, however, that the Cowboys are expecting Bryant to be out four to eight weeks.

The Cowboys, coming off a 27-26 win against the New York Giants on Sunday night, have their bye week Oct. 18.

A source told ESPN's Ed Werder that the team will not consider putting Bryant on injured reserve-designated to return. Placing Bryant on IR-DTR would free up a roster spot for the Cowboys but would mean he wouldn't be able to practice with the team for six weeks and couldn't return to a game for eight weeks.

Earlier reports had said Bryant would have the surgery Tuesday.

Defensive end DeMarcus Lawrence suffered a similar injury last year in training camp. He missed the first eight games of the season in part because he was placed on injured reserve-designated to return.

The fifth metatarsal is on the outside of the foot. Bryant was hurt in the fourth quarter of Sunday's game on a crossing route. He was replaced in the lineup by Devin Street.

Bryant, who in the offseason signed a five-year, $70 million deal with $48 million guaranteed, has had at least 88 catches and 1,200 yards each of the past three seasons, scoring 41 touchdowns in that span.

As his teammates returned to the locker room after Sunday's win, Bryant burst out of the locker room, hopping on one foot, jumping and congratulating them.

Without Bryant, receivers Terrance Williams and Cole Beasley and tight end Jason Witten will probably be the focal points of the passing offense. Street will probably start at Bryant's spot because Beasley works primarily in the slot.

The Cowboys' offense will change without Bryant, who makes it easier for them to run the ball because he draws constant double-teams. Without him, teams will probably play the run more aggressively and dare the Cowboys to make big plays in the passing game.

"Sometimes, those guys aren't available to you, so the next guy has to go in there and play, and everyone has to do their job."

Information from ESPN NFL Insider Ed Werder and The Associated Press contributed to this report.