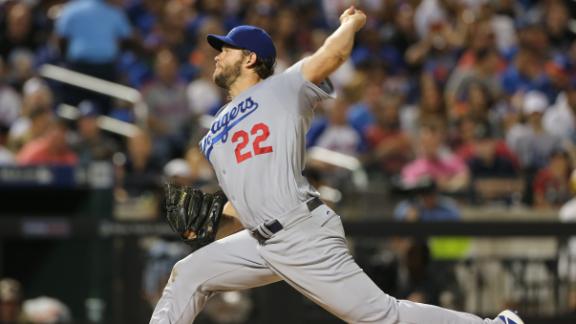 NEW YORK -- Add another accomplishment toClayton Kershaw's growing collection, this one of a historical nature.

When theLos Angeles Dodgers' staff ace struck out his fifth batter Sunday night against the New York Mets, it gave him 100 strikeouts with just five walks. It is the first time in modern history a pitcher has reached the 100-strikeout plateau with only five walks.

The previous best came in 2010 when Cliff Lee had 100 strikeouts with seven walks.

To put it another way, at the moment of his 100th strikeout, Kershaw had a 20-to-1 strikeout-to-walk ratio.

"I didn't even know that stat," manager Dave Roberts said afterward. "When you put it into context, which many of you guys can, when 2-to-1 is [a] pretty good strikeout-to-walk ratio, and now you're looking at 20-to-1, that's something you don't imagine."

Kershaw is all about victories, so personal accomplishments don't give him pause. But put in a practical sense, the 20-to-1 ratio shows his dedication to first-pitch strikes and getting ahead of hitters.

"Yeah, I think so, I think there is some merit to that, just being aggressive," Kershaw said. "Try to get beat with hits and not walks. Tonight I had some three-ball counts and I got some swings outside the strike zone, which was great. I was very fortunate. I got some outs."

The three-time Cy Young Award winner has been dominant again in the first two months of this season. He had a 5-0 record in May before Sunday's start and a 0.64 ERA this month before he was charged with two runs in an eventual 4-2 Dodgers victory.

Kershaw reached the 300-strikeout mark for the first time last season, finishing the year at 301. But he didn't record his 100th strikeout in 2015 until his second start in June. By that time he had already accumulated 19 walks.

"That's a big unfathomable number right there, that ratio," catcher A.J. Ellis said. "It speaks to his commitment to be aggressive in the strike zone. It speaks to his ability to put guys away. It shows who he is as a competitor."