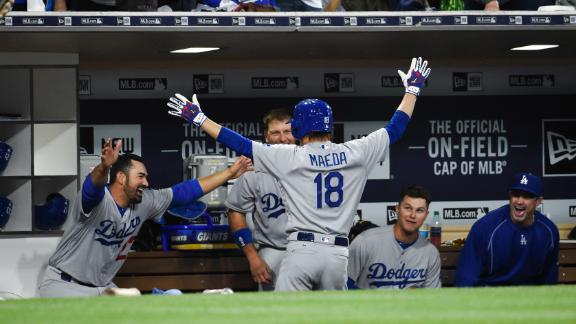 SAN DIEGO -- No major league team has ever been as futile in its first three games as the Padres.

They simply couldn't find home plate in their opening series against the Los Angeles Dodgers, becoming the first MLB team to be shut out in its first three games of a season.

With Wednesday night's 7-0 loss, the Padres set the MLB mark with 27 consecutive scoreless innings to open a season. The old mark was 26 by the 1943 St. Louis Browns, according to Stats LLC.

Meanwhile, the Dodgers, who hobbled into the series with 10 players on the disabled list, became the first team since the 1963 St. Louis Cardinals to post three consecutive shutouts to open a season, a feat that was assisted by standout offense. Wednesday's win gave the Dodgers a 25-0 run-scoring edge in their first series.

"There is still perspective here, not to be lost," rookie Padres manager Andy Green said. "We still do have 159 games left, and we will score runs this year. And we will win series this year."

The Padres thought they had ended their scoreless streak in the sixth. Although Cory Spangenberg was called out trying to score on a grounder to first, the Padres appealed. A replay appeared to show Spangenberg got his foot across the plate before being tagged by Dodgers catcher A.J. Ellis. After a 3:02 review, the call was upheld.

"The reality is this: We had ample opportunities to score runs, and I'm not going to cry about a call that is made in New York," Green said, referring to MLB's replay center. "We had two chances with a guy on third base, and we hit two soft ground balls. That is our opportunity."

At the helm of the Dodgers' success was Dave Roberts, on the bench for his first three games as a full-time manager. Roberts rolled out a staff ace and two new starters then sat back and watched the magic happen.

"These guys, to a man, have prepared, and that's what we talked about in spring training is taking ownership," Roberts said. "I think that once you start with Clayton Kershaw and setting the tone for the pitching staff, then these guys feed off each other. This is where it gets really fun."

It was going to be hard for Maeda to top the one-hit performances of the Dodgers' first two starters, but he found a way when he hit a home run in the fourth inning off Padres starter Andrew Cashner. It was Maeda's second major league at-bat.

Asked what was more special, the home run or the pitching performance, Maeda was torn.

"That's a tough one," Maeda, a native of Japan, said through an interpreter, flashing his ever-present grin as cameras clicked all around. "I'm just very happy that I got a W in my major league debut."

The Dodgers played the opening series with three expected regulars out of action. Outfielder Andre Ethier suffered a broken bone in his leg and will be out for most of the first half, and infielder Howie Kendrick (calf) and catcher Yasmani Grandal (forearm) are nearing a return.

Los Angeles hardly skipped a beat. Yasiel Puig drove in four runs in the series, and Ellis and Adrian Gonzalez drove in three each. Puig went 6-for-10 in the three games.

But despite the avalanche of runs, the club's first home run of the season came off Maeda's bat. Puig followed with a homer later in Wednesday's game.

"I'm happy for him, and he's been great all spring training," Kershaw said of Maeda. "He's an awesome guy. I know that it probably feels good to get that first one out of the way. He looked great. He did everything we thought he could do and even hit a homer, so that's going to be tough to match."

Now comes the hard part. Not only do the Dodgers head to San Francisco for the Giants' first home series of the season, but they will have Alex Wood and Ross Stripling on the mound in the first two games, a pair of pitchers who benefited from injuries in the rotation to secure their starting spots.

The Dodgers hope Maeda's outing makes the transition to the back half of the rotation a little more seamless. The home run could actually play a key role.

The Padres return to the field Friday at Colorado with right-hander Colin Rea on the mound. Rea pitched one inning Monday in the 15-0 loss.

"It will come. It was just three games, three bad games," Cashner said. "But I believe in these guys in the locker room and I believe in myself, and there's no doubt we will come out of it. It's tough any time you lose but especially to those guys. I mean, we play 162 games, and it's one bad series. We just got to play better from here on out."

ESPN staff writer Doug Padilla and The Associated Press contributed to this report.