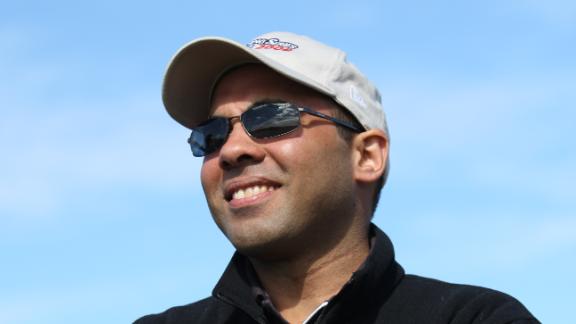 The news will be officially announced later this week.

New Dodgers president of baseball operations Andrew Friedman has taken his time assembling his front office since he was hired on Oct. 15, but it appears to be coming together in time for the GM meetings next week in Phoenix, the unofficial kickoff to the hot stove season.

According to sources, former San Diego Padres general manager Josh Byrnes will also be part of the mix, likely as a scouting director.

The Dodgers have also been linked to San Diego executive Billy Gasparino and, according to sources, they have had talks with one of San Diego's most prominent scouts, Jeff Pickler, a close associate of Byrnes', for a front office position.

The Dodgers' acquisition of Zaidi was earlier reported by MLB.com.

According to a profile in the San Francisco Chronicle, Zaidi grew up in the Philippines, attended MIT as an undergraduate and, after getting his doctorate at UC Berkeley, decided to try to break into baseball after reading the Michael Lewis bestseller, "Moneyball."

He eventually landed with the A's under GM Billy Beane -- the protagonist of that book as well as the movie based on it -- and worked his way up to become the team's assistant general manager for baseball operations.

"He's absolutely brilliant," Beane said in the Chronicle story. "He has a great qualitative mind, but also a creative mind. The ability to look at things both micro and macro is unique and Farhan could do whatever he wants to do, not just in this game, but in any sport or business. I'm more worried about losing him to Apple or Google than I am to another team."

Zaidi is one of the few Muslims in Major League Baseball.

Friedman has vowed to assemble a diverse group of executives and scouts, but it certainly appears to be skewing heavily toward the analytics side of the game and away from old-school scouting.

The Dodgers have also had talks with former player Gabe Kapler about a front office position. Kapler played for Friedman at Tampa Bay.

Ned Colletti was reassigned from general manager to special assistant to team president Stan Kasten. Two of Colletti's top aides, Rick Ragazzo and Vance Lovelace, remain with the organization, but -- according to sources -- have been marginalized.

The Dodgers are trying to compete without having to stretch their payroll to the record lengths it reached this season, $240 million, by emphasizing scouting and player development.

In early February, the A's promoted Zaidi to assistant GM and director of baseball operations. He earned his bachelor's degree in economics from Massachusetts Institute of Technology in 1998 and a PhD in economics from the University of California at Berkeley in 2011.

Zaidi has handled a big load on Beane's staff, including playing a key role in the acquisition of Cuban slugger and outfielder Yoenis Cespedes before the 2012 season. Cespedes, the two-time reigning Home Run Derby champion, was traded to Boston for left-hander Jon Lester at the July 31 trade deadline. The A's, who won the AL West in 2012 and '13, lost in the one-game wild-card playoff to World Series runner-up Kansas City.

Los Angeles won the NL West for the second straight season before losing the NL Division Series in four games to St. Louis.

With the A's, Zaidi's areas of expertise included providing statistical analysis for evaluating and targeting players in the amateur draft, free agent and trade markets. He also worked on arbitration cases, minor league contracts and worked closely with coaches to analyze data from advance scouting reports.

Zaidi previously served as business development associate for Small World Media, the fantasy sports division of The Sporting News, and also worked as a management consultant for the Boston Consulting Group.

Information from ESPN.com senior writer Jerry Crasnick and The Associated Press was used in this report.