Dodgers welcome Zack Greinke back with 5 homers in romp 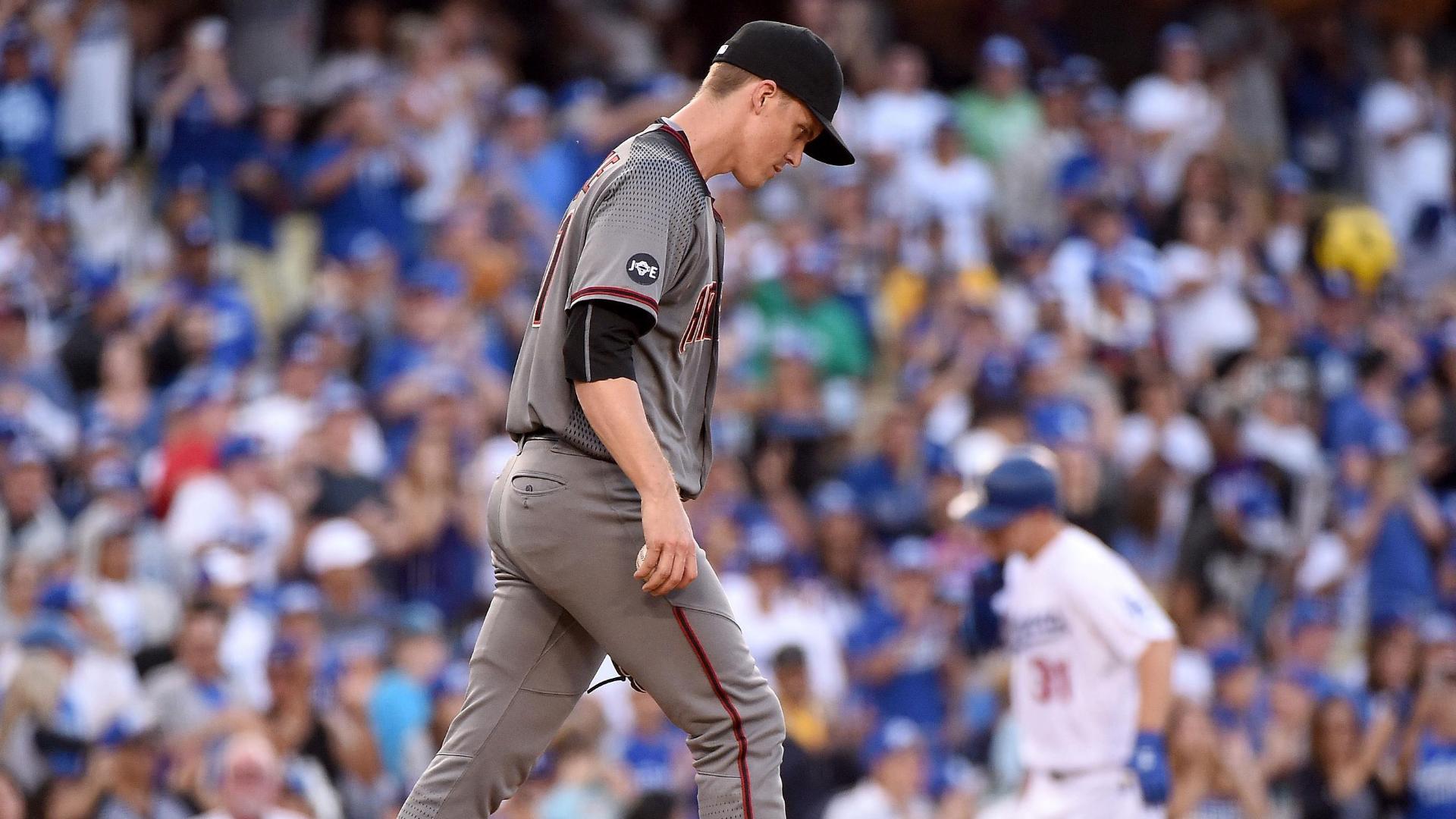 Joc Pederson joined the 20-plus home run club with a solo shot, and Los Angeles beat Greinke and the Arizona Diamondbacks 10-2 on Monday in Greinke's first road start against his former team.

"Things were going bad, and they were swinging good," Greinke said.

The Dodgers increased their lead in the NL West to a season-high four games over San Francisco, which lost 6-0 at Colorado. The Dodgers have won three straight and four of five.

"They're not going to quit, so you can't take your foot off the gas," Dodgers rookie shortstop Corey Seager said.

Kenta Maeda (14-8) allowed one run and three hits, struck out eight and walked one in 6 1/3 innings to tie Kazuhisa Ishii and Hyun-Jin Ryu for the second-most wins by a Los Angeles rookie. They trail only Rick Sutcliffe's 17 in 1979. The Japanese right-hander has won six of his past seven.

"He was staying out of the middle of the plate, and he was getting strikes from both sides and hitting his spots," said Arizona's Paul Goldschmidt, who was 0-for-3 with a walk and a strikeout. "He really had command of all four pitches."

Greinke (12-5) imploded in his return to Dodger Stadium for the first time since he spurned the team as a free agent in December. He signed a $206.5 million, six-year deal in the desert after winning 51 games and compiling a 2.30 ERA from 2013-15 as part of a 1-2 punch with ace Clayton Kershaw in Los Angeles.

Greinke gave up eight runs -- his second-most this season -- and nine hits in 4 2/3 innings and struck out six. The five homers, including four in the fifth inning, were a career worst for him. He hadn't allowed a home run in his past three starts.

"I felt real comfortable out there. Just not a good game," he said. "I felt like I was going to make pitches and get every guy out."

Adrian Gonzalez broke open a scoreless game with a two-run shot in the fourth, a preview of what was to come.

"More times than not, you are going to get him out with that pitch," Greinke said, "but he is one of those guys that can actually get to it, so I wasn't completely shocked."

After Howie Kendrick grounded out to open the fifth, Greinke gave up five consecutive hits. Pederson's home run was his sixth in as many games against Arizona. He,Justin Turner (25), Yasmani Grandal (24) and Seager (24) give the Dodgers four or more players with 20 or more homers for the seventh time in franchise history.

"Zack is one of the best pitchers in the game," Pederson said. "We were really able to break it open, and that's tough to do against a pitcher like him."

Greinke called the 1-2 pitch to Pederson "probably the worst pitch of the night." Two hitters later, Seager slammed a three-run homer into the pavilion in left field. Turner followed with a solo shot in nearly the same location as fans directed a derogatory chant at Greinke, who was booed heartily in his first at-bat.

With two outs, Grandal homered for the third straight game to right field to make it 8-0. Arizona manager Chip Hale came out to pull Greinke, who walked off with his head down and boos ringing in his ears.

"He's so strategic with everything he throws, so it's fun to kind of play with him," Seager said. "You know everything he does is with purpose."

Last season, Greinke led the majors with a 1.66 ERA, won a career-high 19 games and was an NL All-Star while helping the Dodgers win a third straight division title. Now, they are in pursuit of a fourth, while the D-backs have failed to contend this season and are mired in next-to-last place.

Gonzalez's 35th career homer against the D-backs ties Todd Helton for second-most all-time against the franchise and trails only Barry Bonds' 39.

GREINKE AT THE RAVINE

Until Monday, Greinke had been dominant at Chavez Ravine and had won his previous eight starts with a 1.09 ERA dating to July 4, 2015. He was one of five pitchers to win eight-plus consecutive starts there, the longest active streak in the majors at a single ballpark. The right-hander had limited the opposition to two or fewer earned runs in 14 straight starts at the stadium. Greinke had beaten the Dodgers once this season, 3-2 on June 13 at Arizona.

Seager came up a triple short of hitting for the cycle. He singled in the first, doubled in the fourth and homered in the fifth before grounding out in his last two at-bats. He is hitting .342 with 12 doubles, five homers and 15 RBIs in 19 career games against Arizona.

ROOKIES ON THE MOUND

D-backs: RHP Shelby Miller (2-10, 6.81 ERA) makes his second start in the majors since July 6. He allowed two runs in six innings of a loss at San Francisco on Aug. 31. He last faced the Dodgers on July 20, 2014, when he tossed a scoreless inning of relief as a member of the Cardinals. 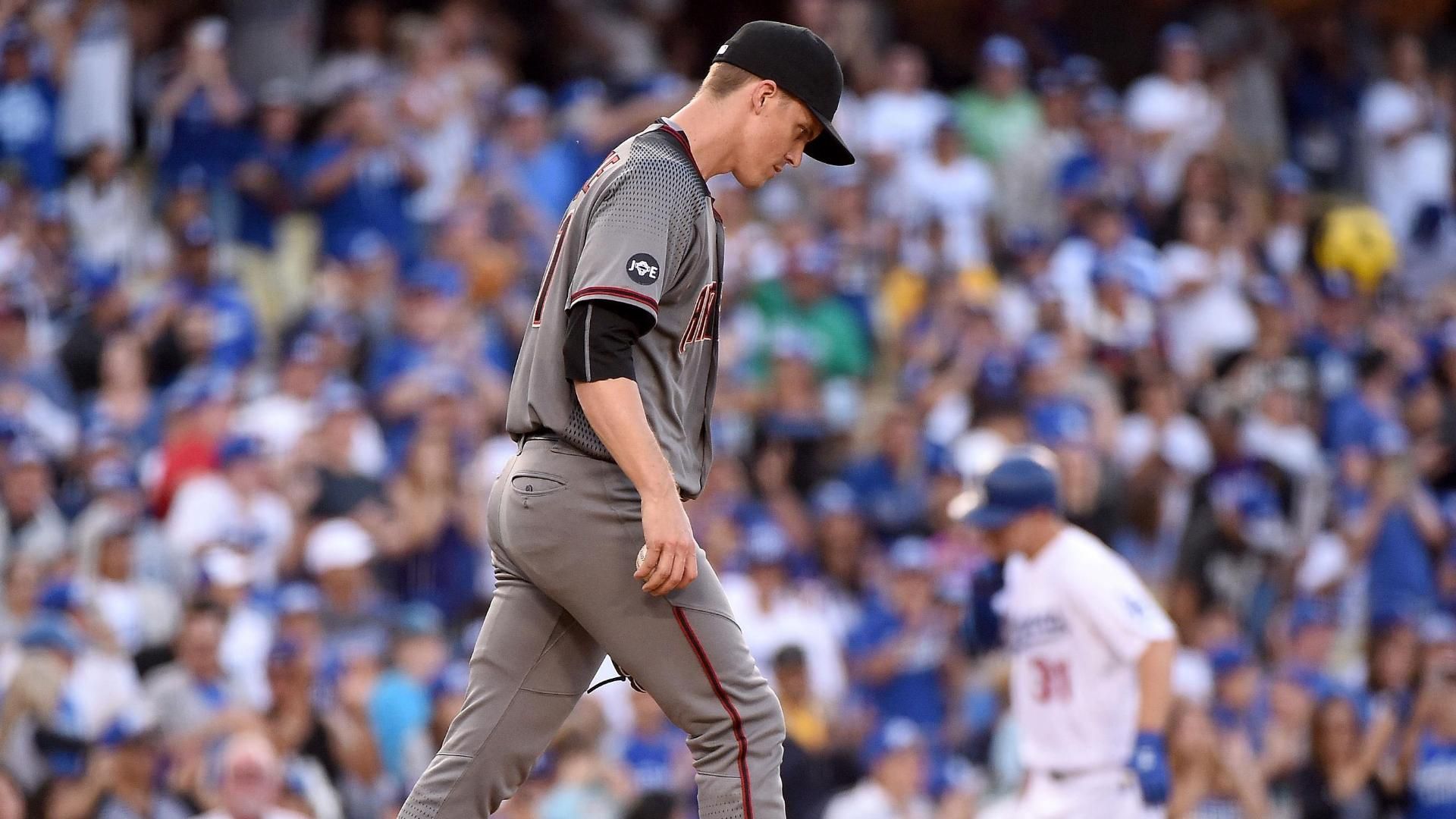