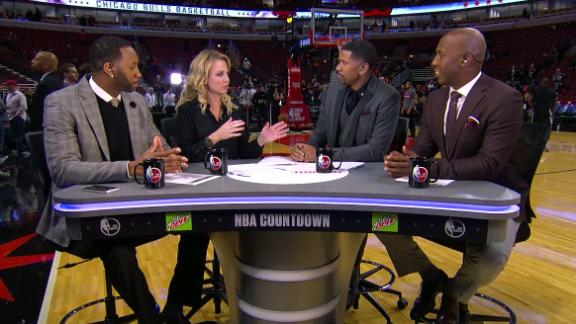 OAKLAND, Calif. -- Draymond Green completely let loose on the NBA, criticizing the league office for its interpretation of an "unnatural act" two days after his latest flagrant foul.

Green repeatedly has been penalized for his frequent high kicks that tend to strike opposing players in the face or the groin. The Golden State Warriors star forward said Saturday that he believes he's being unfairly targeted.

"I just laugh at it because it's funny how you can tell me how I get hit and how my body is supposed to react," Green said after the Warriors' shootaround. "I didn't know the people in the league office were that smart when it came to your body movement. I'm not sure if they took kinesiology and all this stuff for their positions to kind of tell you how your body is going to react when you get hit at certain positions.

"Or you go up and you got guys that jump to the ceiling, and I'm sure a lot of these people that make these rules can't touch the rim. Yet they tell you [that] you are way up there in the air and which way your body [is supposed to react]. I don't really understand that. That's like me going in there and telling them, 'Hey, you did something on this paperwork in here wrong.' Like, I don't know what your paperwork looks like. It is what it is. I think they made the rule and make your rule. Like, I don't care."

Green was hit with a costly flagrant foul 1 Thursday in a double overtime loss to the Houston Rockets. With 2:10 remaining in the game, Green was fouled underneath the basket by Rockets guard James Harden while attempting a put-back layup.

On his way down from elevating, Green's right foot flailed upward and hit Harden in the face.

After reviewing the play, officials ruled it a flagrant 1, rewarding Houston two free throws. With the Warriors down three points, Green split his free throws before Harden took his turn and knocked down both.

Green is not expected to receive any further discipline over the incident, league sources told ESPN. In Green's tirade on Saturday, he coincidentally brought up Harden.

"If you're going to say it's an unnatural act, no offense to James Harden, but I've never seen nobody up until really James start doing it in my life that shoot a layup like this under your arm," Green said. "That's really not a natural act either. It's not a natural basketball play either.

"So, if you're going to make a rule, make a rule. But if you're going to take unnatural acts out the game, then let's lock in on all these unnatural acts and take them out the game if that's what we're going to do. I don't know. Let them keep telling people how their body reacts, I guess. They need to go take a few more kinesiology classes though. Maybe they can take a tape in class, functional movement classes and let me know how the body works because clearly mine doesn't work the right way."

"I wouldn't call it unnatural," Harden said, according to SI.com. "For me, I just go to the basket and go up with two hands like you're taught. If you grab my arm it's a foul. That's pretty natural in the sport of basketball, in any league. I don't know about whatever else [Green] has got going on."

Harden added that his move is even catching on.