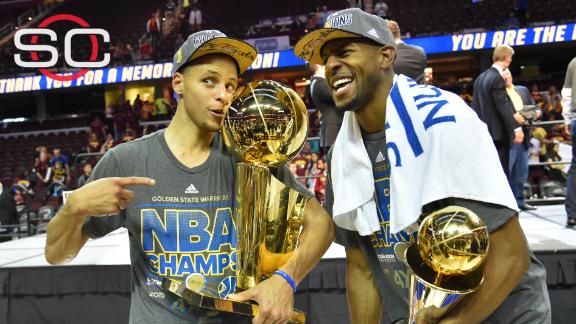 OAKLAND, Calif. -- Forward Draymond Green said Tuesday that teams questioning the Golden State Warriors' championship are bitter, pointing out that you don't hear such talk coming from teams such as the San Antonio Spurs.

Green and Curry made their comments Tuesday when they were asked about people discussing whether the Warriors "deserve" their title, possibly in reference to Los Angeles Clippers coach Doc Rivers saying to Zach Lowe of Grantland, "You need luck in the West. Look at Golden State. They didn't have to play us or the Spurs."

"You see the ring fitting man over there? Jason of Beverly Hills, he over there fitting us for our ring? That's pretty cool. So if they saying that, it's some bitterness and some saltiness going around. They obviously not the champs. So who cares what they say. It is what it is."

Curry "apologized" to critics of the Warriors' title on Tuesday.

"Bitter" is how Green's teammate Klay Thompson described Rivers' comments on Friday, when he also said of Rivers' team, "I wanted to play the Clippers last year, but they couldn't handle their business."

Last week, center Andrew Bogut also responded to the critics in an interview with KNBR radio.

"I've actually got my [championship] ring fitted for my middle finger, so they can kiss that one," Bogut said.

"It's just bad, man," Green said Tuesday, describing how he'd feel about questioning someone else's title. "I would feel bad about myself doing that. That's just crazy to me, but that just lets you know how many people didn't want to see us win. Because they sick."