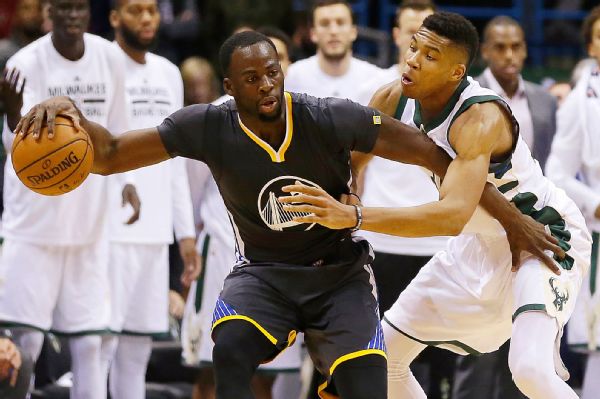 MILWAUKEE -- If opposing teams need a game-winning basket, stay away from Draymond Green Island. He won't take too kindly to your scoring attempts in his vicinity.

"Definitely," Green said. "I think that's disrespectful to me. I take that as disrespect. Don't go at me for game. And of course I'll say that, and next game [they'll] get game or something, but whatever."

Green's bold but not surprising comments were made after the Golden State Warriors' 124-121 narrow road victory over the Milwaukee Bucks on Saturday.

The Bucks clawed back from a 14-point fourth-quarter deficit to come within two with 10.1 seconds remaining. It was Milwaukee's ball on the sideline, andTony Snell was the inbounder. He lobbed the ball to Giannis Antetokounmpo, who was being guarded by Green.

Green reached over Antetokounmpo without fouling and slapped the ball away. Klay Thompson recovered the ball and was fouled immediately. He was sent to the free throw line, where he converted the pair to give the Warriors a four-point lead with eight seconds to go. That was all the cushion needed to wrap up the team's seventh consecutive win.

Green felt disrespected that the Bucks would target him by going to the player he was guarding, so he made sure to make them pay with a game-saving defensive play.

"I already knew what play they were running," Green said. "They have two plays that they run in situations like that. Once Giannis was down on the block, I already knew what they were running, so I was just waiting on them to pass the ball in. I wanted to make it tough and make Tony Snell think about it. I knew once he thought about it that he would throw the lob pass. Then I just went after the ball."

Green and Antetokounmpo were really going at it while fighting for position on that last inbounds play. Considering Green's reputation with the officials, he could have been close to being called for an over-the-back foul.

"Nah, because I was on the side of him," Green said. "If they were going to call it, there really isn't nothing I can do about it. It's one thing if we're down one. I'm going after that ball if we're up two because No. 1, he got to make two free throws, and we get the last shot. So, yeah, you're going to have to make those two free throws. I'm going after that ball."