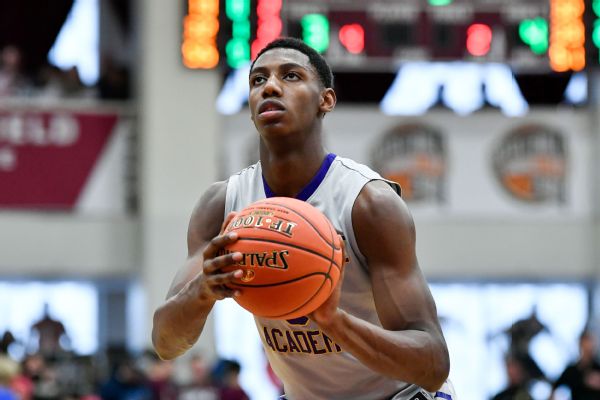 "As Canadian basketball continues to expand and the talent is increasing, just like the U.S., the athletes deserve another game," Washington told ESPN. "Not everyone gets into the other game [BioSteel], and the timing can make it difficult.

"This is an opportunity for us to showcase the talent we have in Canada. We want to give people in Canada the access to see all these kids before they head to college."

A memo about the new game will be sent to all 30 NBA teams later Friday.

The inaugural Signature All-Canadian Showcase will be headlined by R.J. Barrett, a Duke commit whom ESPN projects to be the No. 1 pick in the NBA draft in 2019.

NBA representatives will be allowed to attend the event as a result of it being sanctioned by NBA executive vice president of basketball operations Kiki VanDeWeghe.

"We wanted to make sure that this event is NBA-certified, because there are diamonds in the rough here in Canada, including known players that NBA scouts may not get to see based on their schedule," Washington told ESPN. "Just like in Europe, when scouts go over several times to see clubs, we want to make sure NBA people get the opportunity to get to see our top players, so we did everything we can to ensure [they] had the access they need."

The event will be held at the Hershey Centre in Mississauga on April 23 and will be streamed online. Practices also will be open to NBA scouts. Some of the 24 invited participants, besides Barrett, include Florida-bound Andrew Nembhard, Harvard commit Noah Kirkwood and top Canadian 2019 high school class members such as A.J. Lawson, Quincy Guerrier, Tyrese Samuel, Joel Brown and Emmanuel Miller -- all considered top-shelf NCAA recruits.

Similar to Anfernee Simons, Lawson is taking steps to graduate high school this summer, which would make him eligible for the NBA draft in 2019, as he's turning 19 during the calendar year. He is coming off an impressive performance at the NBA Basketball Without Borders Global Camp in Los Angeles last month, which was heavily attended by NBA decision-makers.

Washington confirmed to ESPN that Lawson "is keeping all options open" pertaining to the 2019 NBA draft.

The Signature All-Canadian Showcase is the second Canadian high school event that has been certified by the NBA. The BioSteel All-Canadian Game, which NBA scouts will also attend, is April 9.