Duke leans on its legion of giants 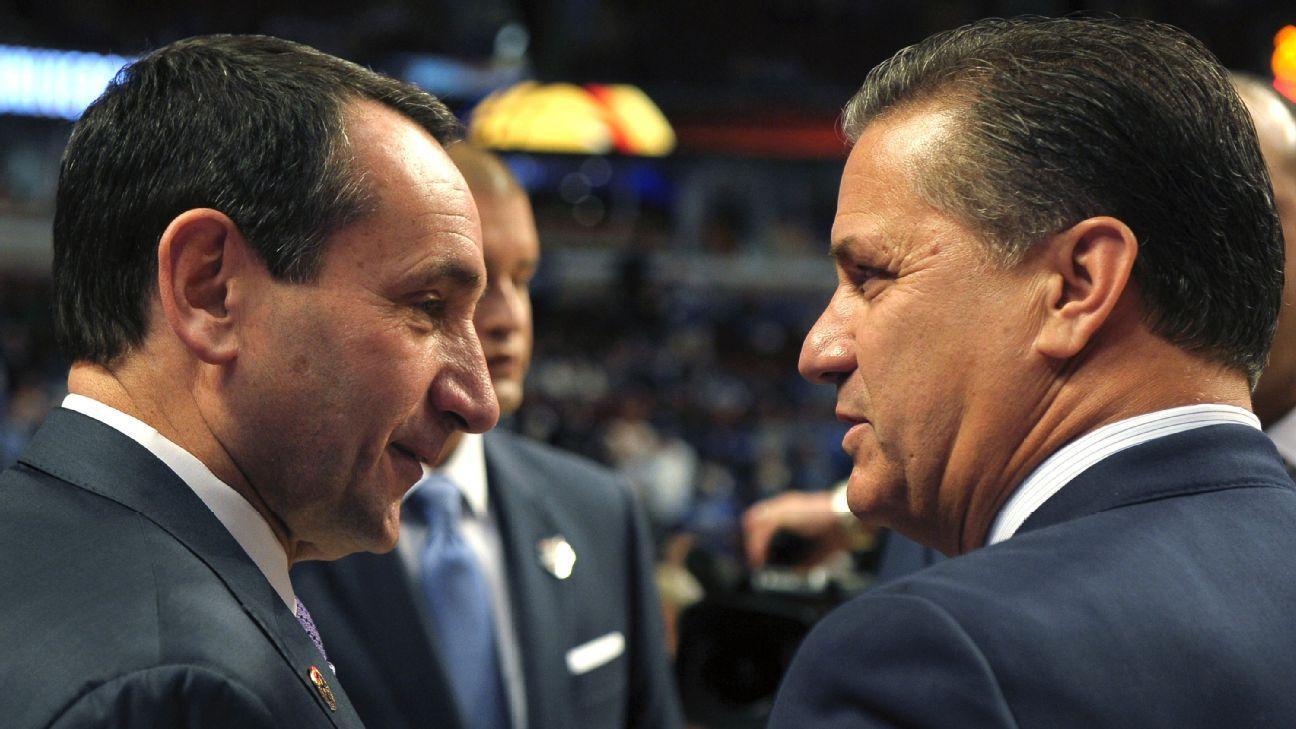 "You freshman grow up! Sophomores too! We've got to quit being little kids!" Mike Krzyzewski has seen enough. His team, the favorite to take the national championship, with a freshman class that includes four of the nation's top 16 recruits, is setting weak screens and missing block-outs. Worse, the players are failing to talk to one another, as deadly a sin as you'll find in the Gospel of K. So at a practice one month before the season, Krzyzewski calls his players the only thing that seems appropriate: little kids.

It is also the one label that doesn't apply. Because while the Blue Devils have an abundance of young talent, there is nothing little about them.

As his players watch, Krzyzewski orders 6-foot-10 sophomore Chase Jeter to flip his jersey from white to blue and motions for 6-10 freshman Javin DeLaurier to take Jeter's place with the starters. When 6-11 freshman Marques Bolden fails to prevent an offensive rebound, he joins Jeter in blue while 6-7 Jack White slides to the first unit. Amile Jefferson, Duke's 6-9 senior captain, barks at his teammates to show some fire. And looking on from a folding chair, his left knee elevated and wrapped, healing from an arthroscopic procedure, is the nation's top recruit, 6-10 freshman Harry Giles.

In fact, according to ESPN Stats & Information, the Blue Devils have never fielded such a giant squad: Nine of Duke's players are 6-8 or taller. "Few teams in the last 10 years have had that blend of size, depth, experience and NBA first-round talent," an ACC assistant says. Adds an NBA executive who attended Duke's pro day in late October: "It's kind of crazy. I've rarely seen this much size and talent on one college team."

Question is, what will Coach K do with all of it?

DUKE BASKETBALL IS known for many things. Size and depth are not two of them.

Two years ago, Duke won the national championship with only eight scholarship players. The 2015-16 squad often rotated just six men. Meanwhile, last decade, the Blue Devils went through a stretch in which they missed on the majority of the big men they recruited. Brandan Wright, Blake Griffin, Patrick Patterson, Greg Monroe-they all spurned Duke for other programs. For a time, Duke played and even excelled with four-guard lineups and NBA wings masquerading as centers-think Kyle Singler and Lance Thomas.

So when associate head coach Jeff Capel returned to his alma mater in 2011, he discovered a recruiting landscape rife with negative stereotypes about how Duke handled bigs. Rival coaches would tell prospects that Duke catered to guards, that big men would spend four years setting screens. "Scare tactics," Capel says.

Krzyzewski needed an example he could reference in real time, and in 2012-13, 6-11 Mason Plumlee became that guy, averaging 17.1 points and 9.9 rebounds and earning the Pete Newell Award as the nation's best big man.

Then came 6-11 Jahlil Okafor, who fundamentally changed the conversation. When Duke landed him before the 2014-15 season, Krzyzewski built an attack centered on Okafor's array of low-post moves and preternatural ability to pass out of double-teams. The result was the nation's third-most efficient offense, according to kenpom.com, a national championship and a new message for hyped prospects: Duke was back in business for bigs.

"Jah being here really set the tone for all the bigs that, like me, are coming through," says Bolden, a McDonald's All-American. "We saw how much they played through him."

Among the current freshmen, Giles was the big prize. Duke landed him last November, and the North Carolina native and his close friend Jayson Tatum (himself 6-8) gave Coach K the top two players in the class of 2016. But Duke wasn't satisfied and kept chasing Bolden; the Blue Devils saw him as a true back-to-the-basket center with soft hands and advanced footwork.

The massive Texan-Bolden weighs 250 pounds and has a 7-6 wingspan-took his time deciding. He was fully aware of the size of Duke's roster and could have stepped into a 30-minute, 15-shot role virtually anywhere else. But as the rest of the top recruits came off the board and the calendar turned to May, he opted to join Krzyzewski's army of giants.

"He saw a need, that there's no one like him in our program," Capel says. "And the recruiting class that we already had signed, the guys we had coming back, I think he wanted to be a part of something like that."

Adds Bolden: "I didn't want to shy away from any competition. Anything worth having isn't easy."

WHICH BRINGS US to Coach K's dilemma: When the injured Giles, Bolden and Tatum return to the lineup, he will have more bigs than he can possibly use-and a penchant for small ball.

Duke is just as stacked on the perimeter. Grayson Allen is the preseason ACC player of the year. Tatum should be a top-five pick in next June's NBA draft. Shooting guard Luke Kennard could be a 2,000-point scorer if he plays four years at Duke. Freshman Frank Jackson, yet another McDonald's All-American, is the closest thing Duke has to a point guard. And senior Matt Jones started on the 2014-15 national championship team. Krzyzewski says Allen has "got to play 30-something minutes a game." Even before Bolden got hurt, Coach K had already planned to use Tatum at the 4 spot in spurts. That would leave fewer than 80 total available minutes for Duke's bigs, a hefty portion of which will belong to Jefferson-the team's vocal leader-and a healthy Giles. Do the math and it's clear several players will be left out of the rotation entirely.

But Krzyzewski isn't worried about keeping people happy. He proves that at the lackluster Friday practice. "I'll play five guys!" he shouts as his players look on, hands on hips. "I'm not gonna do the thing where everybody gets playing time." His message evokes memories of Kentucky's team from two years ago. It too was loaded with size and talent, and coach John Calipari famously implemented a platoon system in the first part of the season, winning the first 38 games before losing to Wisconsin in the Final Four. That group is the best proxy for this Duke squad, but Krzyzewski isn't Calipari and won't spread minutes evenly.

Now more than ever that type of crunch for playing time can lead to attrition in college basketball. And if history is any guide, Duke won't begrudge anyone who departs: Since 2012 alone, the Blue Devils have lost six players. "Some guys stick it out. Some guys, if it's not happening for them right away, they leave," Capel says. "A kid has to make a choice of what he thinks he should do."

But if a big man chooses to stay, his resilience might be rewarded. Look at Jeter. He was the nation's No. 11 recruit coming out of high school but played less than eight minutes per game as a freshman last season. As Krzyzewski added more and more stars to this freshman class, no one could have blamed the 6-10 Jeter for bolting. Instead, he went to work. And with Giles recovering from his scoped knee and Bolden suffering a lower leg injury in November, Jeter opened the season as Duke's top center. "These guys are my teammates," he says, "but we have to be willing to go between the lines every day and fight for a spot."

Duke has already seen how capricious a basketball season can be. It lost Tatum for two weeks during the preseason after he sprained his foot. Just as he was coming back, Bolden went down. Giles hasn't played in a year, though he's getting closer. Other issues will doubtlessly emerge, and yet Duke's depth puts it in a unique position to absorb them.

Krzyzewski will tinker with that depth, especially early, studying it to see which combinations work and might be effective come conference play, which prospects he can mold into cornerstones. Whether the lineup is big or small, Duke will press full-court more than it has in recent years since fatigue shouldn't be an issue, and it has the length to play a stifling zone. Coach K, in other words, might prefer a style of play, but he's not inflexible. "We could put some interesting lineups out on the court, and one of the cool things about Coach is he's open to it," Capel says. "He'll try things."

And he'll push. The day before that lackluster practice in Cameron, the Blue Devils went at each other in high-intensity drills and furious games of five-on-five for nearly three hours. Krzyzewski says there was more contact that one afternoon than in a month's worth of practices last year, when he simply tried to nurse his depleted squad through the season. Now he can challenge his players.