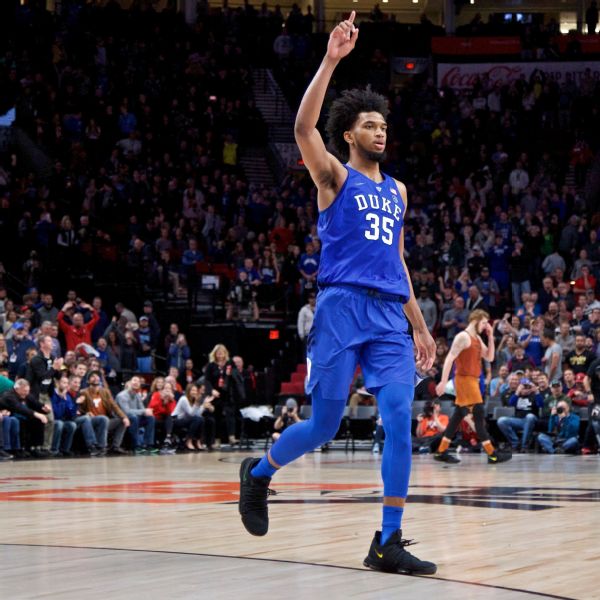 CORAL GABLES, Fla. -- Duke forward Marvin Bagley III had his right shoulder pop out of place while going for a rebound in the opening minute against Miami, but was able to return to help the No. 5 Blue Devils beat the No. 25 Hurricanes83-75on Monday night.

Bagley collided with a Miami player shortly after the opening tip and later said, "It was a freakish thing that happened." After initially being unable to move his shoulder, he was able to pop it back in himself. Still, trainers took him to the locker room for an examination to make sure the injury wasn't more extensive.

"I didn't want to move it because I was kind of scared it was going to hurt bad, so as I was walking I kind of moved it up and it kind of went back in," Bagley said. "I started moving it around and the trainers told me to come to the back and they just checked it out to see if it was anything. I was doing everything good, came back out and finished the game."

Bagley returned after about five minutes had elapsed in the game and said he spent some time feeling his shoulder out to make sure nothing would hurt his movements.

"As we kept playing, I wasn't really thinking about it," he said. "I was trying to get this win and we did."

Bagley ended up having an off-night by his standards, scoring just 13 points. But he said his shoulder wasn't the issue.

"I kept getting to my normal spots, they just weren't falling for me tonight," he said. "It was just that type of day. Not every game is going to be perfect, so I understand that. It's going to be a journey where it's going to be up-and-down in games. It really [doesn't] matter how I play. At the end of the day we got the win and that's what's most important."
Report a correction or typo
Related topics:
sportsespnduke blue devilsshouldermens college basketball
Copyright © 2022 ESPN Internet Ventures. All rights reserved.
TOP STORIES
Winter storm moves out, refreeze possible overnight
NCSHP reports 200 crashes statewide, urges drivers to stay home
Dozens of RDU flights canceled through Monday evening
Monday events canceled, postponed due to winter weather
Why do we get freezing rain instead of snow or sleet?
FBI identifies hostage-taker at Texas synagogue
How to drive on snow, ice and get out of a skid
Show More
Expect more worrisome COVID variants after omicron, scientists say
After Biden's first year, the virus and disunity rage on
Novak Djokovic leaves Australia after court rejects visa challenge
Ukraine claims Russia behind cyberattack in 'hybrid war'
Hostages in N. Texas synagogue 'out alive and safe,' Gov. Abbott says
More TOP STORIES News