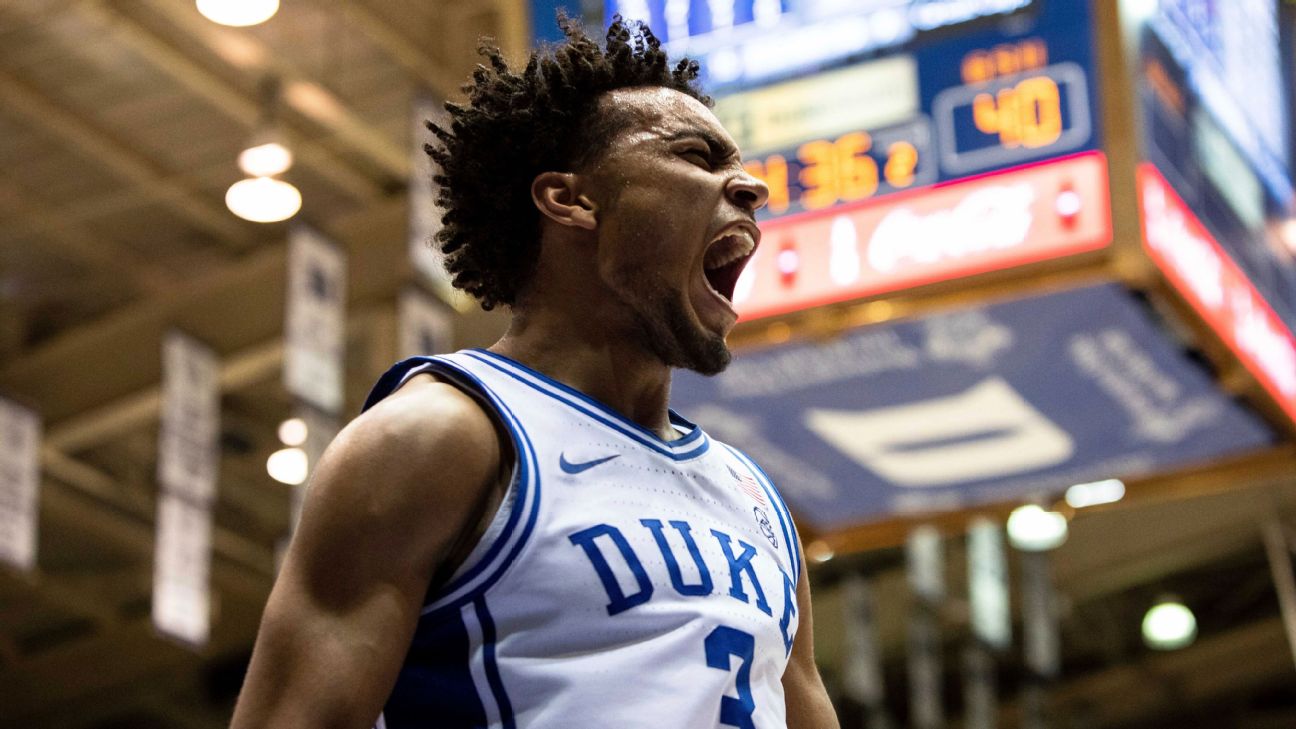 There were no marquee top-25 matchups in college basketball on Friday, but several premier programs were in action. Duquesne and Lipscomb had a historically bad night shooting from the perimeter; Monmouth's George Papas taunted Kansas players despite a 53-point deficit; BYU won at the buzzer when TJ Haws' shot hit the front rim and bounced in; and Auburn point guard J'Von McCormick set a school record with 16 assists.

But here were the top things to know Friday night and moving forward:

Tre Jones is a star in his own right

As a freshman last season, Duke's Tre Jones established himself as one of the best defenders in the country, but he was still overshadowed on a nightly basis by Zion Williamson, RJ Barrett and Cam Reddish. Jones was regularly the fourth option on the offensive end and wasn't counted on to be a big-time scorer. Heading into this season, however, it was understood that would have to change; Jones needed to be more of a scorer. And without Williamson, Barrett and Reddish, Jones has thrived. He had 30 points, 15 assists and just four turnovers in the first two games of the season, against Kansas and Colorado State, but the best offensive game of his career came in Friday's 74-63 victory against Georgia State.

Jones finished with 31 points, four 3-pointers, six assists and four steals -- and Duke needed all of those points to hold off the Panthers for the first 25 or so minutes of the game. The Blue Devils went into halftime with just a two-point lead. But with the game tied at 40, Jones scored Duke's next five field goals to ignite a 13-0 run that gave the Blue Devils some breathing room. This came after Jones scored 17 of Duke's 36 first-half points.

While it was considered the No. 2 incoming group in the country, Duke's freshman class is obviously not at the same level as last season's. Every newcomer on the team has gone through some struggles through the first four games, and it's going to be a work in progress to figure things out consistently on the offensive end. But if Jones is going to be a legitimate go-to guy at the end -- and he was the player to make key buckets against Kansas in the opener -- he will buy coach Mike Krzyzewski some time to mold the freshmen.

While the extended 3-point line received more attention heading into the season, it is the NCAA's attempt to rid the sport of flopping that has made more of an impact in the first two weeks. The NCAA is treating flops like delay-of-game violations: The first offense is a warning, and the second offense is a Class B technical foul.

On Friday night, Missouri State was called for flops on three separate occasions, resulting in two technical fouls and free points for Xavier. That ended up making the difference in the game, as Keandre Cook was called for a flop on a missed 3-pointer in the final minute with the contest tied. Xavier went down and hit the free throw, then scored on the ensuing possession to come out with a 59-56 win.

Through the first two weeks of the season, the flop rule has been a flop when it comes to implementation. Officials have allowed for no middle ground between fouls and flops. There was contact on Cook's shot (while it could have been called a foul, it wasn't), but the contact was the reason Cook fell to the ground. Players hitting the floor doesn't need to be a foul or a flop. Sometimes it's neither. Contact happens in basketball and players fall down. There has to be a middle ground where it's simply a non-call and play goes on.

Alabama had high hopes for coach Nate Oats' first season in Tuscaloosa, with NCAA tournament aspirations and a top-half SEC finish among the preseason expectations. That's all still attainable, but the Crimson Tide's past two weeks have been tough -- both on and off the court.

They opened the season with a one-point home loss to Penn, the same team that went to Rice four days later and lost by 19. Though Alabama bounced back to beat Florida Atlantic at home on Monday, the Crimson Tide lost a recruiting battle on Tuesday, as five-star guard Nimari Burnett committed to Texas Tech over Alabama. On Friday, Alabama traveled to Rhode Island and lost by 14 points. While the margin was extended in the final couple of minutes, this was a game the Rams led throughout and really controlled from start to finish. Rhode Island led by as many as 22 points in the first half.

The concerning part for Oats had to be the guard matchup. On paper, Alabama's perimeter group of Kira Lewis Jr., John Petty Jr., James "Beetle" Bolden and Jaden Shackelford should be one of the better backcourts in the SEC. But on Friday, they were thoroughly outplayed by Rhode Island's tandem of Fatts Russell and Jeff Dowtin. Russell and Dowtin combined for 43 points and seven assists, while Lewis is the only one of the aforementioned four Alabama guards who came to play.

Alabama can bounce back, and it could start this weekend. Five-star forward Isaiah Jackson is set to choose among Alabama, Kentucky and Syracuse on Saturday, while ESPN 100 forward Keon Ambroseis expected to announce on Sunday. We're predicting Kentucky for Jackson, but Alabama is a front-runner for Ambrose. That could put something of a positive spin on what has been a tough two weeks for Oats and the Crimson Tide.

3 things for the coming days

Washington and Tennessee facing off in Canada

Washington already has one of the most impressive victories of the season under its belt, coming back to beat Baylor in Alaska last week. The Huskies get another chance to add a quality win on a neutral court, as they head to Toronto to battle Tennessee. Rick Barnes' Volunteers haven't yet been tested this season, so it's hard to get a feel for how they're going to be in the post-Grant Williams/Admiral Schofield/Jordan Bone era.

The key on Saturday is going to be how Tennessee's bigs deal with the elite frontcourt tandem of Isaiah Stewart and Jaden McDaniels. The two freshmen anchored Washington's comeback against Baylor, so Tennessee will need breakout junior Yves Pons to be a factor up front. Pons, a France native, was a nonfactor for his first two seasons in Knoxville, but he is averaging 17.0 points and 5.5 rebounds in two games.

How Villanova responds to its blowout loss

We're not used to seeing Jay Wright's Villanova teams get completely run off the floor, but it has now happened three times in the past two seasons -- all to Big Ten teams, perhaps not coincidentally. Most recently, Ohio State crushed the Wildcats by 25 points on Wednesday, with Villanova shooting just 28.1% from inside the arc and finishing with more turnovers than assists. This isn't the prototypical Villanova team, with guards on top of more guards. With Bryan Antoine still recovering from injury, the Wildcats don't have any go-to perimeter scorers, and Wright has been playing bigger lineups than in the past.

On Saturday, Villanova won't be facing a Big Ten team, as it will host an Ohio team that has already beaten St. Bonaventure and Iona on the road. Keep an eye on Bobcats sophomore guard Jason Preston, who is averaging 18.0 points, 9.0 rebounds and 9.7 assists through three games.

In-state showdown between Marquette and Wisconsin

Marquette and Wisconsin have played 80 games against each other, with a head-to-head matchup every season since 1959, with the exception of 1985. The Badgers hold the series lead right now 67-58, although it is split down the middle over the past 18 games.

Marquette is expected to be the better team this season, but Sunday's game is in Madison. The Golden Eagles rallied from down 18 to beat Purdue earlier this week, and it was Koby McEwen's coming-out party for Marquette. The Utah State transfer, who sat out last season, was expected to add some scoring pop next to Markus Howard while also allowing Howard to play off the ball. McEwen went for 23 points and four assists against Purdue -- one game after Howard had 38 against Loyola (Maryland).

Slowing those two down will be imperative for Wisconsin, which was lit up for 26 points by Jordan Ford in a season-opening loss to Saint Mary's. Nate Reuvers taking a step forward has been a bright spot for the Badgers; he is averaging 15.3 points, 8.0 rebounds and 4.7 blocks. 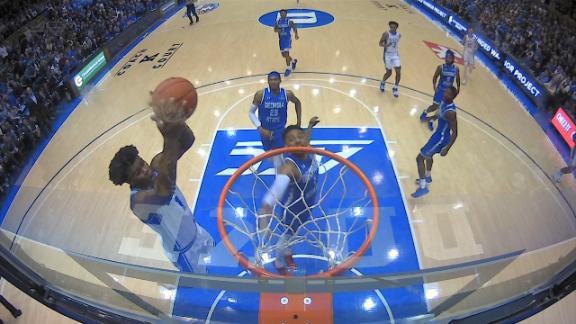