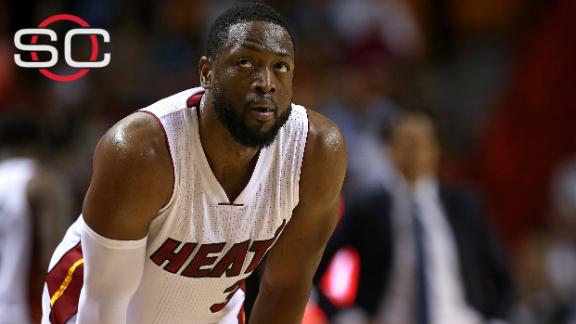 MIAMI -- As the clock ticks toward Dwyane Wade's midnight contractual deadline, the Miami Heat are preparing for the most decorated player in franchise history to enter free agency.

The Heat are still awaiting word from Wade and his representatives as to whether the perennial All-Star and three-time NBA champion will opt in to a final year at $16.1 million. Wade has until 11:59 p.m. Monday to notify the Heat if he will pick up the option for next season.

Should Wade decide to not take any action by midnight, he will automatically become a free agent Wednesday.

The Heat received forward Luol Deng's decision Monday, when he opted into another year at $10.2 million.

Neither Wade, 33, nor agent Henry Thomas immediately responded to messages seeking comment Monday. A league official told ESPN.com on Monday that nothing has changed regarding Wade's stance with the Heat, with both sides expecting to discuss parameters of a new contract later this week.

Wade is believed to be seeking a deal that would average at least $16 million over the next three seasons. The Heat had preferred Wade opt in for the final season of his contract and then work with the team on a new contract after next season that would give the Heat salary-cap flexibility going into the 2016 free-agency period, when Kevin Durant could become available.

Heat president Pat Riley did not address Wade's status Monday during the team's introductory news conference for No. 10 overall pick Justise Winslow, who was selected with the hopes of adding depth on the perimeter behind Wade and Deng. After Thursday's draft, Riley suggested the team would work toward a resolution with Wade in free agency that would allow him to end his career in Miami.

Miami will also open free agency looking to quickly re-sign point guard Goran Dragic, who is likely to receive a five-year deal worth in excess of $90 million.

Riley disputed speculation that Wade has let the team know he felt "disrespected" by a lowball offer on a new contract. Last summer, Wade opted out of the final two years and $41 million on his contract and agreed to a two-year, $33 million deal to help the team rebuild on the fly after LeBron James' unexpected departure in free agency.

Offering Wade a significant raise next season could trigger a massive luxury-tax penalty for the Heat, and a long-term deal at the salary Wade wants would limit the team's free-agency flexibility. Wade remains one of the most productive shooting guards in the league when healthy, but he has missed 48 games over the past two seasons with persistent knee, hamstring and groin injuries.

"Everybody in this organization over the years has had to sacrifice," Riley said of Wade last week. "The one player that's had to sacrifice [most] for the sake of winning has been him. This is now getting down to business. We respect him. We want him back. We want him here for the rest of his career. And we're going to try to do everything to make that happen."

Midnight deadline looms on Wade decision
Chris Broussard discusses the latest news on Heat guard Dwyane Wade, who has until 11:59 p.m. ET Monday to notify the Heat if he will pick up the option for next season.