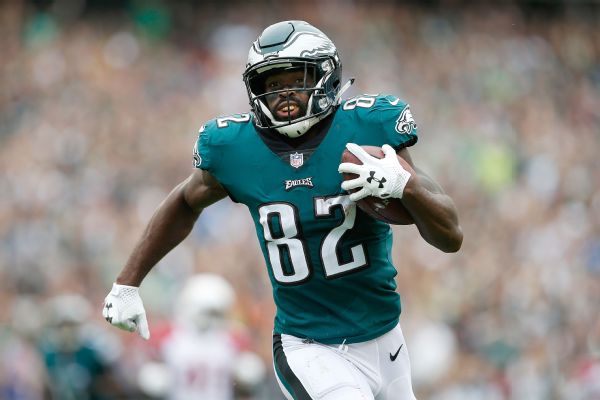 Smith, 29, caught 36 passes for 430 yards with two touchdowns for the Super Bowl champion Eagles in 2017, adding 13 catches for 157 yards and a touchdown in the postseason.

The Eagles are currently projected to be about $14 million over the salary cap and need to shed salary between now and the start of the league year on March 14. Smith will make a base salary of $5 million in 2018, while Worley is on the third year of his four-year rookie deal and is scheduled to make $650,000.

In an Instagram post, Smith thanked the Eagles organization and fans. He added: "We are family forever. I would like to thank my teammates, the men I will miss the most. I have never had this much fun playing this game that we all love and it was all because of y'all. We had a great time, worked our tails off, and made each other better."

Worley was in and out of the starting lineup the last half of the season for Carolina and did not quite play to the level of James Bradberry, who started opposite him. The 23-year-old Worley started 14 of 15 games when healthy. He was pulled after the second series against the Eagles in Week 6 and sat for a good portion of the game. While he started most of the rest of the year, the Panthers also subbed him out a lot. Worley finished with two interceptions, 10 passes defended and a sack.

Smith gives the Panthers the veteran receiver that coach Ron Rivera said he wanted in free agency. Carolina dealt Kelvin Benjamin to the Buffalo Bills for a third-round pick and a seventh-round pick at the trade deadline in November and is looking to add talent to a group that is led by Devin Funchess and includes Curtis Samuel, Damiere Byrd and Russell Shepard.

In Smith, the Panthers get a speed receiver with big-play ability who ran hot and cold during his one season with the Eagles. He was charged with three drops, according to ESPN Stats & Information, and was held to a catch or less in eight regular-season games but was a quality presence in the locker room and stepped up in the playoffs. A two-time Super Bowl champion, he had a 41-yard touchdown catch in the NFC Championship Game against the Minnesota Vikingsand had five catches for 49 yards in Super Bowl LII against the New England Patriots.

Second-year player Mack Hollins out of North Carolina will have a chance to earn more reps for the Eagles opposite Alshon Jeffery in Smith's absence. They also have Shelton Gibson, Bryce Treggs and Greg Ward on the roster along with Nelson Agholor, who developed into a quality slot receiver last season.

Smith is the second Eagles receiver to be traded in as many days, with Marcus Johnson being sent to the Seattle Seahawks as part of the deal for defensive end Michael Bennett. It would be no surprise if the Eagles try to replenish at receiver via free agency, trade or the draft.