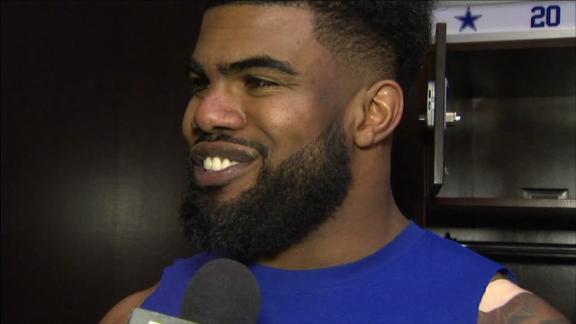 ESPN
By Darren Rovell
Dallas Cowboys running back Ezekiel Elliott's jump into a big Salvation Army red kettle after scoring a touchdown in Sunday night's game versus the Tampa Bay Buccaneers seems to be paying dividends for the charity.

Busroe said that was a 61 percent increase over a similar time period from Sunday night into Monday last week.

The publicity surrounding the jump into the oversized kettle was worth at least $4 million in equivalent advertising exposure, said Eric Smallwood, president of sponsorship evaluation firm Apex Marketing Group.

"Let's give Zeke credit for that. It is certainly fun," Cowboys owner, president and general manager Jerry Jones said Monday. "We have those kettles there because we do want the visibility of reminding everybody, certainly at this time of year, how doing the most good is putting a dollar in that red kettle. To have gotten that attention in front of probably 20 million or so people [Sunday] night for the Salvation Army was just wonderful."

Frigid temperatures in some cities are expected to have an impact on donations in the final days of the year.

"We needed this boost," Busroe said.

"It's certainly the most we've been talked about in the five years I've been here," Busroe said. "We were trending on Twitter last night."

Elliott was flagged for excessive celebration, which usually carries a fine of $12,154, but NFL spokesman Brian McCarthy tweeted Monday morning that Elliott would not be fined. Elliott, who had planned to match a fine with a donation, tweeted he would still donate.

Odell Beckham Jr. also chimed in on Twitter and didn't seem too pleased that the NFL let Elliott get by without a fine.

Busroe confirmed what Elliott had said postgame: Despite a two-decade close connection between the Cowboys and the charity, the Salvation Army and Elliott had not planned the stunt, nor did they have any official relationship. Elliott was part of a group of Cowboys rookies who attended a function at a Salvation Army in Fort Worth last month.

The Cowboys defeated the Buccaneers 26-20 at AT&T Stadium in Arlington, Texas.