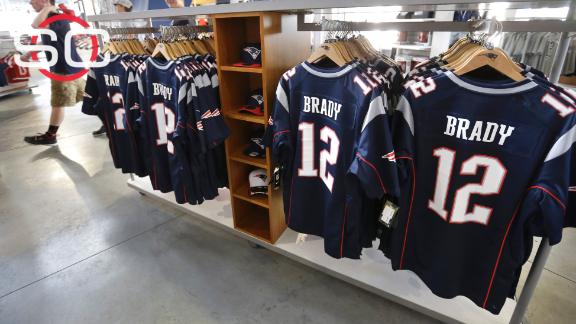 In an offseason during which Tom Brady was suspended for his alleged role in Deflategate, merchandise sales related to the New England Patriots quarterback have been the highest in the NFL, according to a list released Thursday by NFL Players Inc., the marketing arm of the players' union.

The list, which counts sales from licensees for the first quarter of the union's fiscal year (March 1-May 31), had Brady at No. 1, followed by quarterbacks Colin Kaepernick of the San Francisco 49ers, Russell Wilson of the Seattle Seahawks, Drew Brees of the New Orleans Saints and Peyton Manning of the Denver Broncos.

Brady finished first for the quarter in sales of figurines (Oyo), wall posters (Fathead), bobbleheads (Forever Collectibles) and hats (Lids). He finished second in the league in jersey sales over that time period, behind onlyWilson.

Wilson also sold more licensed products in the children's space, while Kaepernick had the best sales among women's apparel.