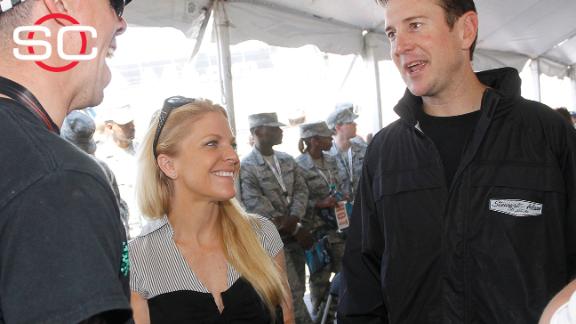 FBI and IRS officials are investigating Patricia Driscoll, former girlfriend of NASCAR driver Kurt Busch, over allegations she has mishandled money as executive director of the multimillion-dollar Armed Forces Foundation, three sources told Outside the Lines.

The investigation follows an Outside the Lines report on May 22 that detailed a host of questionable practices by Driscoll during her ongoing 12-year run as executive director of the foundation, which has ties to sports-related entities, including NASCAR. Driscoll also is facing a federal whistleblower complaint filed by a former foundation employee.

Among the practices raised in the Outside the Lines report:

Documents show the Armed Forces Foundation had, in effect, been repeatedly used as a bank to lend money for or pay various personal expenses, including bills for a private company Driscoll owns.

The nonprofit's federal tax filings and audit reports in some instances fail to match, resulting in unexplained discrepancies about the amount of cash on hand, the mismatches totaling in the hundreds of thousands of dollars.

Until May 4, the foundation paid Driscoll and another person $96,000 in annual rent for its headquarters -- a building they co-owned -- which is operating in apparent violation of Washington zoning regulations.

Documents that the FBI has access to reveal not only tax paperwork discrepancies but also personal expense questions: The foundation wrote a $15,000 check toward Driscoll's legal fees to a law firm involved in her child-custody case; it paid $6,315.22 for an infrared security camera shipped to her Maryland residence; and it picked up the tab for personal expenses on vacations to Paris and Morocco. Alongside Driscoll's $171,027 foundation salary, documents show she received substantial bonuses for fundraising -- none of which was declared on the foundation's tax filings or audit reports reviewed by Outside the Lines.

In addition, records available to the FBI show that, for 17 months in a 19-month stretch in 2012-13, the foundation paid the credit card bill of Driscoll's private security business -- Frontline Defense Systems. The FDS charges totaled more than $100,000 and included massage treatments, dermatology visits and other personal medical expenses, toy store purchases and grocery bills, among others.

Driscoll has declined to be interviewed by Outside the Lines multiple times. A crisis communications firm hired by the foundation, though, and the foundation's general counsel have adamantly denied any wrongdoing on her part. After the Outside the Lines report published, the foundation and Driscoll hired Atlanta-based attorney L. Lin Wood to "evaluate potential libel claims for false and defamatory reporting," stating that "the one-sided reporting of ESPN makes accusations that are blatantly and demonstrably false."

This week, in response to email questions sent to Wood, Driscoll issued a statement describing Outside the Lines' pursuit of the story as "shameful,'' saying her only connection to sports is her having been the alleged victim of domestic violence at the hands of a professional athlete, Busch. She also "unequivocally denied any allegation that she has used AFF funds to pay any of her personal expenses." Wood referred to the allegations raised by Outside the Lines as "baseless" while adding: "Neither AFF nor Ms. Driscoll is aware of any current federal investigations being conducted into the operation of AFF.''

Spokespersons for the FBI and IRS declined to comment.

Through Wood, the foundation and Driscoll said a recent preliminary forensic analysis by the foundation's auditor had "concluded that the allegations of wrongdoing contained in the ESPN Article are inaccurate.'' The foundation said an independent CPA also is completing a forensic analysis and it hopes to receive a report soon. It was further noted that AFF had not initiated any new policies or accounting procedures.

In 2001, the Armed Forces Foundation was a small, all-volunteer operation focused mostly on lining up fishing trips for wounded soldiers and generated about $100,000 in donations. Through Washington connections, Driscoll became a member of the foundation's board that year before becoming executive director two years later. Using tenacity and Washington connections, she turbocharged the charity to where it generated more than $13 million in revenue in 2013, eventually setting up its headquarters in a row house she co-owns a few blocks from the U.S. Capitol.

Busch, the former Sprint Cup champion, has in the past been described by Driscoll as the foundation's "celebrity ambassador." Ties between entities associated with the couple are evident throughout several years of federal tax documents and include non-cash contributions from Kurt Busch Inc. -- the NASCAR driver's North Carolina-based business.

Driscoll's child-custody case also contains allegations of financial malfeasance related to the her work with the foundation. A slew of financial records that became public this week in court filings linked Driscoll to a host of other questionable expenditures.

On Monday, attorneys for Driscoll's ex-husband, just days after having filed a contempt of court motion against Driscoll in her child-custody case, accused Driscoll's attorneys of obstructing discovery in that case. While doing so, her ex-husband's attorneys filed roughly 800 pages of documents with the Howard County Circuit Court in Maryland -- including financial and bank records from both the Armed Forces Foundation and Frontline Defense Systems, Driscoll's private business -- that had been obtained through a subpoena of financial institutions. Attorneys also subpoenaed documents from a former foundation employee.

In the filings, her ex-husband's attorneys accused Driscoll of multiple criminal offenses, including embezzlement/theft of nonprofit corporation funds in excess of $150,000, wire fraud, mail fraud and money laundering. Also alleged were criminal tax violations. Similar claims were made as well against Driscoll's private business, a limited liability company organized under Nevada state law.

The latest motion also sought to disqualify and seek sanctions against Driscoll's attorney, Robert Erdmann, for allegedly denying he had been compensated in the form of a $15,000 check written from the Armed Forces Foundation account in October 2012. Attorneys for her ex-husband, Geoff Hermanstorfer, allege the payment was for Erdmann's work in the custody case and further allege the Maryland law firm Warfield, Darrah & Erdmann is criminally culpable.

Driscoll, through attorney Wood, denied the payment had to do with work in her personal custody case, saying, "His firm performed legal work for AFF and was compensated for that work by AFF.''

Erdmann has not responded to multiple calls to his office since Tuesday.

In court documents, Hermanstorfer's attorneys accuse Driscoll of "hiding her true income and lavish lifestyle'' by not complying with discovery and failing to produce financial records from her private business and only "sparse'' documents from Armed Forces Foundation.

Her ex-husband's attorneys also subpoenaed credit card and checking account statements for both the Armed Forces Foundation and Driscoll's private company, and assert, like the earlier Outside the Lines investigation, that she used the foundation to pay what would appear to be personal expenses -- regular stops at local grocery stores, coffee shops and restaurants close to her Maryland home.

The charges to the foundation's credit card, according to court filings, also include roundtrip airline tickets from Texas to Charlotte, North Carolina, for Driscoll's parents in May 2012. Driscoll's attorney responded to questions from Outside the Lines about the transaction: "AFF routinely pays for travel for family members of its staff to attend various volunteer events.''

The court filings reveal tens of thousands of dollars in expenses charged by Driscoll on the AFF credit card, including payment of Driscoll's federal and state tax bills in 2012 as well as three pairs of Chanel sunglasses purchased on eBay. Documents show the charitable foundation also paid the monthly lease and upkeep of a Range Rover driven by Driscoll.

Records also indicate the foundation spent more than $13,000 to refinish floors and repair the air conditioning unit at its Washington office, even though the townhouse was co-owned by Driscoll and the foundation was paying nearly $100,000 annual rent. Documents also reveal AFF spent more than $13,000 in airline fees for Driscoll's now 10-year-old son. And during the time Driscoll dated Charlotte-based Kurt Busch, AFF paid more than $12,000 for almost 70 flights for Driscoll to travel to and from Charlotte. According to court documents, the expense was recorded on AFF books as charitable program expenses associated with the foundation's "Troops to the Track'' program.

Wood this week denied that the foundation has ever paid the monthly credit card statement of Driscoll's private business, adding the caveat: "The only payments from AFF for FDS credit card bills were payments that were credited against Ms. Driscoll's commission account for funds that were due and payable to Ms. Driscoll from AFF.'' Federal tax filings from the foundation reviewed by Outside the Lines do not list any commission bonuses paid to Driscoll, which would have been required by the IRS.

In late May, when asked by Outside the Lines if Driscoll received any compensation beyond what had been listed on the federal tax forms, Hugh Webster, the foundation's legal counsel and a member of its finance committee, said: "Everything is reported on the 990.''

But foundation documents, some also filed as part of the child-custody case, show otherwise.

One foundation document shows Driscoll was entitled to a 5 percent commission on all funds she raised and was to be paid a $71,582.35 commission in 2013. Records also show copies of a $10,000 check from the foundation made payable to Driscoll on May 23, 2013, with the memo area on the check left blank; and an AFF check for $42,559.49 made payable by Driscoll to Frontline Defense Systems on Nov. 14, 2012, with the memo area again left blank.

In verifying employment on a mortgage application in January 2014, Driscoll's gross base pay was listed at $250,000. For 2012, her base salary was listed at $132,113.35 and commissions even more than her salary -- $133,151.64. Her commissions for 2011 were $89,768.57. A personal financial statement filed with the court in her child-custody case shows that Driscoll listed monthly AFF commissions of only $3,000. The federal tax form filed by the charitable foundation has three places where it requests reporting of additional compensation, twice spelling out bonus and incentive compensation. No bonuses or commissions were listed on any of the foundation's IRS Form 990 reviewed by Outside the Lines.

Marc Owens, a Washington tax attorney and onetime director of the IRS' Exempt Organization Division, said not listing other income from the foundation "hides the income payment from the IRS ... And also the Form 990 is used as a reporting document for the state. So understating compensation is a state issue as well in states where returns are filed.''