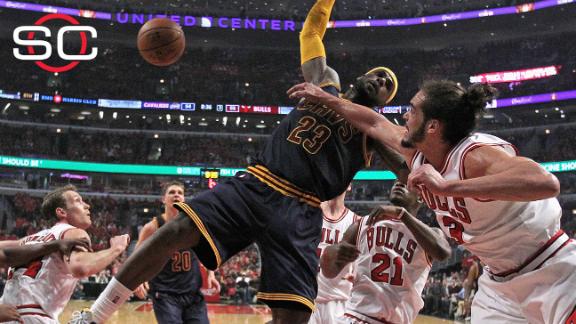 CHICAGO -- A new chapter was added toLeBron James and Joakim Noah's long-running feud Friday night, when James became upset about trash talk from Noah that he felt crossed the line.

Midway through the third quarter of what turned out to be a thrilling 99-96 Bulls victory on a buzzer-beater from Derrick Rose, Noah fouled James on a non-shooting play. Then, according to James, Noah made an offensive personal comment.

"I'm a father with three kids. It got very disrespectful," James said. "I'm OK with competing against Jo. I love the competitive nature, but we should leave it there. The disrespectful words that he said to me were uncalled for."

Less than 10 seconds later, James spun off defender Jimmy Butler on a post move and drove for a dunk. Noah came over on help defense, but James had position and finished the play around Noah. James then stared Noah down as he inbounded the ball.

Official Tony Brothers quickly called James for a technical foul for taunting and then stepped between the players. Noah came back at James and was also called for a technical.

"The best way to retaliate is by making a play. That's the only way I know how to resolve things is by making a play to help our team," James said. "If it was the '90s or '80s, I would've been able to say what I had to say and move on. But I got the T. And I earned it."

"Disrespectful? I got mad respect for LeBron," he said postgame, according to the Cleveland Plain Dealer. "We're just two players trying to win a game. That's all."

Friday was at least the third time in their careers that James and Noah have gotten into a spat that resulted in double technical fouls.

In 2009, Noah took offense to James' dancing during a Cavs blowout victory. While on the bench, Noah yelled at James on the foul line. James stalked over to the bench between free throws to confront him, and they had to be separated.

During the 2013 playoff series between the Bulls and Miami Heat, Noah wrapped James up on a drive to the basket, they got tangled, and again, they got into each other's faces before being pulled apart and given technicals. Also, following a 2011 Bulls loss in Miami, Noah made a comment calling James and his Heat teammates "Hollywood as hell."

James and Noah have now played 18 playoff games against each other over the past six years, and they have been teammates in the All-Star Game. Both have routinely offered compliments about the other, but there is no missing the underlying dislike. Even amateur lip readers could easily identify some of the harsh words exchanged in games over the seasons, including Friday night.