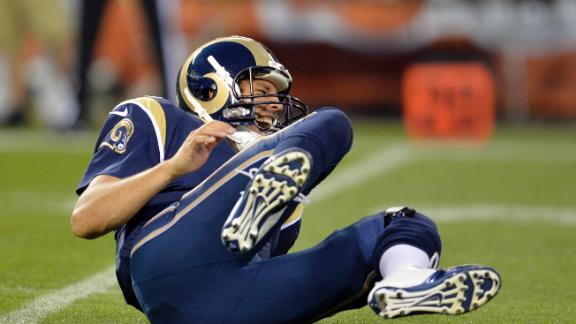 ESPN
By Nick Wagoner
CLEVELAND -- St. Louis Rams quarterback Sam Bradford limped out of Saturday night's 33-14 preseason win against the Browns with 8:19 to go in the first quarter after suffering a left knee injury.

After the game, Rams coach Jeff Fisher said more tests would be needed when the team returns to St. Louis on Sunday but also indicated that he was optimistic about what those tests will yield.

"I can't speculate but it appeared just to be a hyperextension of the same knee," Fisher said. "He's walking around fine inside right now. That's all I can tell you."

A league source told ESPN NFL Insider Adam Schefter that initial tests did not show any damage to Bradford's surgically repaired left ACL, adding that the Rams "dodged a bullet."

Bradford will undergo an MRI no later than Sunday, Fisher confirmed Saturday night.

Bradford took what appeared to be a light hit from Cleveland's Armonty Bryant as he threw incomplete to tight end Jared Cook. Bradford shrugged Bryant off, but the defensive lineman made contact with the quarterback's left knee.

Bradford fell to the ground in pain as Rams doctors and trainers rushed to his side. He limped off the field under his own power but favoring the left leg as he went to the locker room for further examination.

Bradford was making his second start of the preseason after returning from a season-ending torn left ACL suffered against Carolina on Oct. 20, 2013. Bradford went 4 of 9 for 77 yards before leaving.

Two more Rams were injured on the same play in the second quarter. Cornerback Trumaine Johnson suffered a knee injury and defensive tackle Michael Brockers tweaked his ankle. Johnson's injury appeared to be the most serious. He was taken off the field on a cart, and several teammates wished him well before he was driven away.

Fisher said those four players would also need further examination before anything more can be determined.

"We'll be busy in the morning diagnosing," Fisher said. "The extent to what the injuries are, I can't make any predictions as to whether anybody should be back for Miami, Minnesota, what have you."