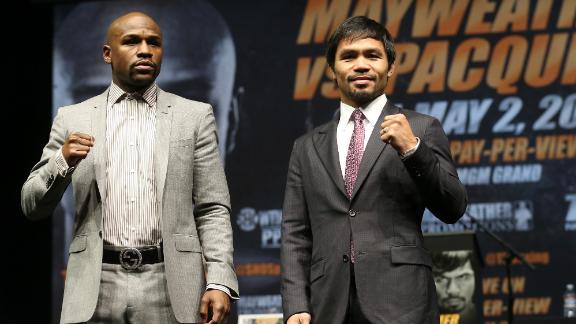 Those who want to watch the Floyd Mayweather-Manny Pacquiao fight will have to pay a pretty penny.

Both HBO and Showtime confirmed to ESPN.com that the suggested retail price for the May 2 fight is $89.95. Any HD surcharge -- which could be up to $10 -- is at the discretion of the individual TV provider.

The suggested retail price is a new record for a boxing pay-per-view event, nearly 40 percent above the previous high. The previous high of $64.95 (some providers have charged an extra $10 for HD) was established by Mayweather in his fight against Canelo Alvarez in Sept. 2013. Mayweather's subsequent fights against Marcos Maidana also hit that number.

Those who can't afford to buy the fight in the comfort of their own home might plan to go to a bar, but there's a question as to whether some bars will want to make the investment to bring the fight in. Bars are charged based on their legal occupancy. The owner of a high-end New York City sports bar said that the fight will cost him $21 a person that night, which he'll happily absorb, but he can see how other establishments that generate less revenue might take a pass.