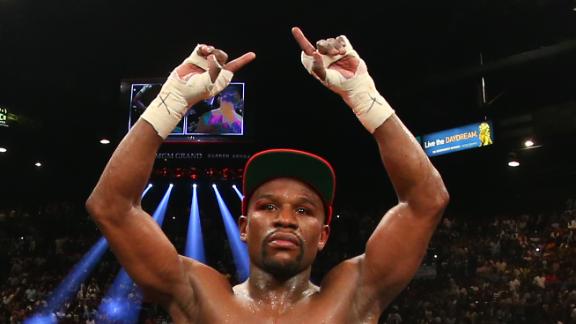 Mayweather (46-0, 26 KOs) found himself in a serious dogfight, trying to fend off the super aggressive Marcos Maidana of Argentina and his wild overhand rights, but his accuracy was the difference in a majority decision victory to unify welterweight world titles on Saturday night before a sold-out crowd of 16,268 at the MGM Grand Garden Arena.

Typically, Mayweather fights are over early, when it is obvious that he is dominating his opponent and on his way to a wipeout decision win. But Maidana, a 12-to-1 underdog and given no chance by anyone other than his most ardent supporters -- one media poll was 46-0 in Mayweather's favor -- was in the fight all the way.

He sure did. For action, it might have been his most exciting fight, perhaps with the exception of a 2012 junior middleweight title bout against Miguel Cotto. It was so good and competitive that talk after the fight immediately turned to the possibility of a fall rematch.

"He put pressure on me and that's when I decided to fight differently," Mayweather said. "I stood there and fought him. He's a good fighter, I take nothing away from him."

For the fight, Mayweather landed 230 of 426 blows (54 percent) while the nonstop punching Maidana connected on 221 of 858 (26 percent). Maidana threw punches from all kinds of angles and forced Mayweather into the ropes time and again.

Maidana (35-4, 31 KOs), who mauled and brawled the whole fight, thought he won, as did his chanting fans.

"I definitely think I won," Maidana said through a translator. "Floyd had never been hit by a man before. I had to change the gloves [after a last-minute problem with his original gloves on Friday] and I still gave him a great fight.

"He did dominate some rounds but the majority, I dominated them."

In December, Maidana scored a major upset by dropping Adrien Broner twice, roughing him up and winning a unanimous decision. It was the kind of performance and exciting fight that opened Mayweather's eyes, and it landed him the fight.

Just like Maidana had done against Broner, he roared at Mayweather at the opening bell and never stopped blasting and looking for a knockout. He seemed to have Mayweather out of sorts at various times in the fight, but Mayweather never seemed to be in that much trouble and was able to counter and land accurate left hooks and lead right hands.

Maidana trapped Mayweather along the ropes for a long stretch of the first round and was landing overhand right hands on top of his head and to the side of the head. It set the tone for the fight as Maidana, who rehydrated to 165 pounds on fight night compared to Mayweather's 148, threw 100 punches in the round.

Maidana's pressure remained intense throughout the fight as he never stopped moving forward and trying to push Mayweather against the ropes. But even though he did, Mayweather countered with quick right hands. In the third round, Mayweather also opened up with a series of body punches. Referee Tony Weeks also warned Maidana for hitting behind the head in the third round.

As aggressive as Maidana was, Mayweather stood in the pocket and was sharp with his right hand, but Maidana would not stop coming at him and winging overhand rights. He cut Mayweather over the right eye in the fourth round, a rarity in Mayweather's career.

"That came from a head-butt and I couldn't see for two rounds after the head-butt, but that's what champions do -- they survive and they adjust," Mayweather said. "True champions adjust to anything. He's a champion, I'm a champion and we did what we did in there tonight.

"I had a great cutman in Rafael Garcia and he stopped the bleeding immediately and after I could see again, it didn't bother me. [Maidana] is a tough competitor."

The action continued in a tremendous action- and tension-filled fight with an electric atmosphere in an arena that would alternately fill with chants of "Argentina! Argentina!" and then "USA! USA! USA!"

No matter what Mayweather, 37, of Las Vegas, would do, Maidana would not go away. He was swinging heavy punches and taking everything Mayweather threw at him. And Mayweather, who earned at least $32 million, landed a lot of clean right hands and left hooks.

Maidana, 30, who made at least $1.5 million plus television revenue from Argentina and upside on the pay-per-view profits, was so aggressive that during the 11th round, he nearly tackled Mayweather out of the ring.

"I think it was a very, very exciting fight. Maidana came to fight. We all knew Maidana would come to fight and he did. He always does," Golden Boy Promotions chief executive Richard Schaefer said. "He was not intimidated by Floyd. Even though Floyd landed some good shots it didn't seem to hurt Maidana at all. He kept coming and he wasn't going to give up."

With the win, Mayweather, who has now won 10 alphabet titles in five weight classes, became the first fighter in boxing history to simultaneously unify alphabet belts in two weight classes -- welterweight and junior middleweight -- although the organizations' rules do not allow fighters to hold belts in multiple divisions. But they have made an exception for Mayweather, who brings them big money with each of his bouts.

With no obvious September opponent for Mayweather to face in the fourth fight of his six-fight, $200 million-plus contract he signed last year with Showtime/CBS -- we've already been down the Manny Pacquiao road too many times to be fooled again -- the prospect of a rematch with Maidana seemed quite real.

"I'll sit down with the teams and see if that's what gonna be next," Schaefer said, who added that he liked the idea of a sequel.

Maidana, of course, felt robbed and wants to do it again.

Ultimately, the decision will rest with Mayweather, who talked about possible retirement in the days leading up to the fight. But he didn't sound that way after the toughest fight of his life.