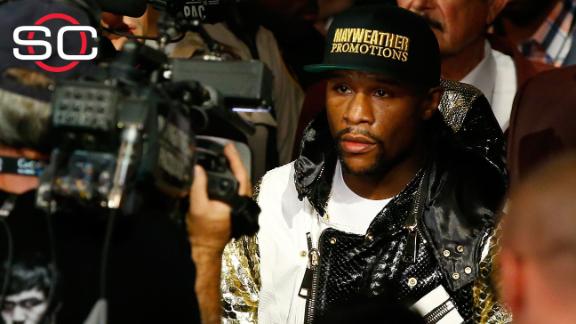 Pound-for-pound king Floyd Mayweather, who told ESPN's Stephen A. Smith on Tuesday that he would be willing to put off his planned September retirement to grant Manny Pacquiao a rematch next year, said he has changed his mind.

"Did I text Stephen A. Smith and say I will fight him again? Yeah, but I change my mind. At this particular time, no, because he's a sore loser and he's a coward," Mayweather told Showtime in an interview taped this week that will air Saturday night (9 ET) during the network's replay of last Saturday night's megafight at the MGM Grand in Las Vegas.

"If you lost, accept the loss and say, 'Mayweather, you were the better fighter,'"Mayweather continued.

Mayweather won a unanimous decision in the welterweight world championship fight, which will go down as the richest in boxing history and one of the most anticipated fights ever.

After the fight, Pacquiao said he went into the ring with a right shoulder injury that hampered his performance. Pacquiao had arthroscopic surgery Wednesday in Los Angeles to repair what his surgeon, Dr. Neal ElAttrache, termed a "significant tear" to his rotator cuff.

Pacquiao will be out of the ring for nine months to a year, but Mayweather, who planned to fight again in September in the final bout of his six-fight Showtime/CBS contract and then retire, told Smith he would fight Pacquiao in a rematch next spring once he had healed.

Mayweather (48-0, 26 KOs), however, is annoyed that Pacquiao (57-6-2, 38 KOs) and his team have blamed the loss on the shoulder injury rather than give Mayweather credit for his performance.

After the fight, Mayweather said his shoulders and hands were hurt going into the fight but he didn't make excuses. He said he instead found a way to win, as he always does.

Mayweather calls Pacquiao a coward, declares no rematch
Dan Rafael discusses Floyd Mayweather's comments to Showtime's Jim Gray that Mayweather has changed his mind regarding a rematch with Manny Pacquiao.