On an evening when Cole Anthony exploded and the Syracuse offense imploded (thanks entirely to Virginia), there is one rather incredible streak that came to an end on Wednesday. One you might have missed ...

Every season we hear about heralded freshmen, but we can never really know if the hype is justified until we actually see these elite players, well, play. It turns out that in Cole Anthony's case, the hype was woefully insufficient.

Naturally, this was just one game, a 76-65 North Carolina victory over Notre Dame. Then again, thanks to the ACC's adventurous conference scheduling this season, it happened to be a game against an improved Fighting Irish team and not against some hopelessly outclassed opponent. And, facing Mike Brey's group in Chapel Hill, Anthony lit up both the floor and the box score with 34 points, 11 rebounds and 5 assists. The freshman shot 6-of-11 on his 3s, and he pulled down fully 26% of the available defensive rebounds during his minutes in the game. It was a dominant two-way performance from a 6-foot-3 star who scored from both sides of the arc, distributed the ball and crashed the glass.

Possibly the most amazing single stat to come from Anthony's debut was this: 43.2%. The freshman personally accounted for 43.2% of UNC's shot attempts during his minutes on the floor. That won't last (Trae Young clocked in at 34.5% for Oklahoma two seasons ago), and, possibly, it's best for the Tar Heels that it won't. Roy Williams will need more than just Anthony to win an ACC title, but, on this night, it was sufficient to result in the highest-scoring debut ever recorded by an ACC freshman. No Zion Williamson or Trae Young figure this season? Don't be so sure.

Virginia can wait for its offense

It's one thing to know conceptually that Virginia will be great at defense again (even if we have questions about an offense that lost De'Andre Hunter, Ty Jerome and Kyle Guy). It's another thing to actually see that Cavaliers defense go on the road in its first game of the season and win an ACC game 48-34 against a potential bubble-level opponent.

In defeating Syracuse in its home dome, the Hoos held Jim Boeheim's team to just 0.60 points per possession. Per KenPom.com, that qualifies as the worst showing on offense recorded by the Orange since at least 2001-02. True, Virginia was nothing special on offense in its own right (the Cavaliers were 4-of-25 from beyond the arc), but, with a defense like this, Tony Bennett's men will have some time to work on their scoring.

It took 685 days and 27 tries, but San Jose State has at last won a game away from home. In beating Hofstra 79-71 at the Mack Sports Complex in Hempstead, New York, the Spartans won a game played somewhere beside San Jose, California, for the first time since Dec. 21, 2017. Richard Washington and Craig LeCesne combined for 42 points and led SJSU to the win, as Jean Prioleau's men put on a late spurt for the victory. Well done, Spartans.

3 things for Friday and Saturday

In its opening-night loss to Duke, Kansas achieved the not-inconsiderable feat of recording its highest turnover percentage in a game in almost six years. After giving the ball away on 35% of their possessions in the Champions Classic against the Blue Devils, the Jayhawks were fortunate to still be in a position to win the game in the final minutes. Still, many observers found fault with Bill Self's allegedly anachronistic two-big lineup. This particular line of thought holds that playing Udoka Azubuike alongside David McCormack (or, at times, next to Silvio De Sousa) deprives the KU offense of badly needed spacing and results in easy and low-risk double-teams on Azubuike. The Jayhawks weren't always in the two-big configuration against Duke, of course, but KU did show that look for the balance of the contest.

Will Self stick with what he's doing? Can Kansas work out the kinks with its two-big attack? Was that 38-0 run to the 40th minute of the 2015 national semifinals by a two- and sometimes even three-big Kentucky rotation all just a big misunderstanding? Perhaps further evidence on these and other queries will be forthcoming when Kansas hosts UNC Greensboro in Lawrence on Friday night (9 p.m. ET, ESPNU).

A good many humans and laptops alike assured us in the preseason that the Fighting Illini would be much improved in 2019-20. Then, in their first game of the season, Brad Underwood's men allowed Nicholls State to score 16 unanswered points late in the game to take the contest to overtime in Champaign. In the end, the Illini were happy to escape the ordeal with a 78-70 victory after the extra session. Next up for Illinois, a true road game at Grand Canyon.

Dan Majerle's Antelopes opened their season by dropping an 82-73 decision at home to Division II opponent Davenport. So, getting back to Illinois, ordinarily a loss on the road in November wouldn't necessarily be a huge deal. Then again, losing to the team that just lost to the Division II Panthers would greatly amplify the skepticism that's already surrounding the Illini after their first 45 minutes of action.

Wondering about rule changes and scoring

Just two days into the season, there have already been a few stray grumbles about low scoring in 2019-20. Is the dip in production due to the new 3-point line, the fact that ACC teams were already playing other ACC teams (instead of overmatched opponents), just a small-sample-size blip or something else entirely? Those answers will come very soon, as November renders its verdict on the game's latest tweaks. 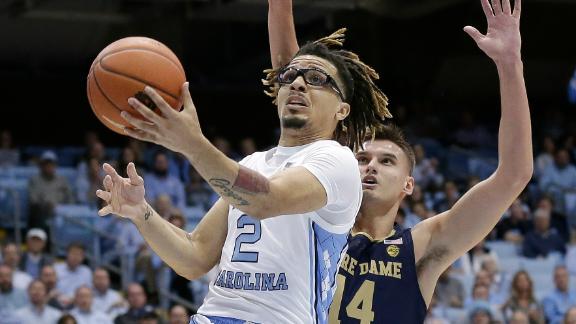 Anthony sets UNC freshman record in terrific debut
Cole Anthony excites the North Carolina faithful as he tallies 34 points, the most by a UNC freshman in his debut. 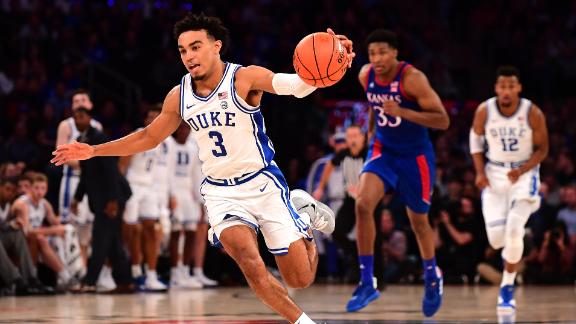