ESPN
By CL Brown
CHAPEL HILL, N.C. -- Susan Scott, the older sister of former ESPN anchor Stuart Scott, said that of the many North Carolina greats her brother interviewed through the years, he never considered himself to be among them.

He's officially in that category now.

Scott, who died in January after a long bout with cancer, was inducted into the North Carolina Journalism Hall of Fame on Friday. During UNC's annual Late Night with Roy, an event Scott frequently hosted that signals the start of basketball season, he also was given the Tar Heel Trailblazer award, which recognizes individuals who "paved the way for success in all aspects of the student-athlete experience."

Hall of Fame soccer player Mia Hamm, one of the most accomplished athletes to come through North Carolina, considered Scott an equal. She presented Scott's Hall of Fame award, which was accepted by his sister. Hamm met Scott shortly after she graduated in 1994 and said his greatness came in how he treated others.

"Whenever you met him and talked to him, you just felt this amazing kind of energy and life force," Hamm said. "You kind of left the conversation feeling a lot better about yourself."

Scott, a 1987 UNC alumnus, was unapologetic in his love for the Tar Heels. It started in his preteen years, when, Susan Scott said, he would cry when the Tar Heels lost.

"When I say he would cry when Carolina lost -- he would cry," said Susan Scott, who is a 1979 UNC alum. "He would kick my parents out of the room if they were losing and then they started winning. He insisted that everything aligned so that Carolina Tar Heels could win."

One of the first times Scott entertained the Late Night crowd, he began by pounding the interlocked "NC" at midcourt and saying: "That's what it's all about right there. It's on the floor. It's on your shirt. It's in your heart. That's why we're all here."

"That was one of the nicest things that I've ever heard," Williams said. "He was a pioneer in some ways and a guy I truly, truly liked."

Sage Steele, host of ESPN's NBA Countdown, recalled to the Smith Center crowd a bet she had with Scott back in 2012 when her alma mater, Indiana, beat North Carolina. Scott was forced to wear the Hoosiers' colors and showed up wearing their trademark candy-stripe warm-up pants.

As a tribute to Scott, Steele put on a Carolina jersey with "S-Squared" on the back. That was how Scott introduced the two the only time they anchored SportsCenter together.

Susan Scott reflected on how her brother would have received all the honors that Friday brought.

"It's Carolina," Susan Scott said. "He would love it." 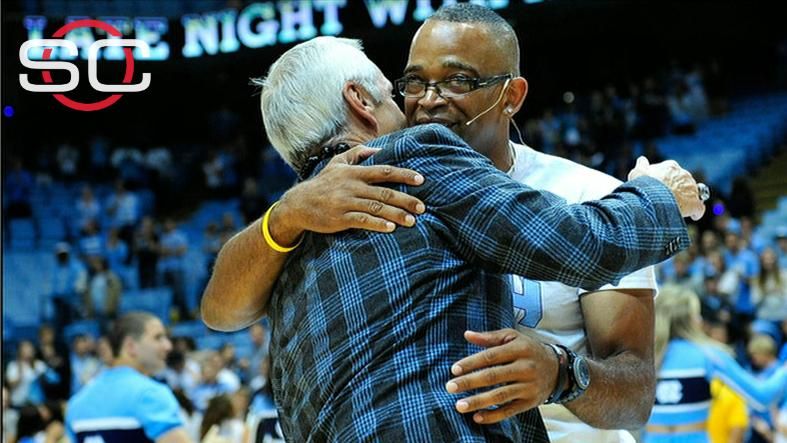