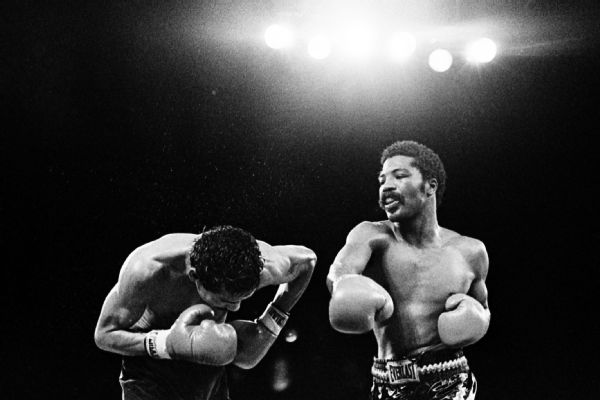 Aaron Pryor, one of the greatest fighters in boxing history, died early Sunday after a long battle with heart disease. He was 60.

"We are heartbroken and sad to announce that our beloved Aaron passed away at home surrounded by his family at 5:57 a.m.," Frankie Pryor, his widow, said in a statement. "He was known around the world as 'The Hawk' but to our family he was a beloved husband, father, grandfather, brother, uncle and friend. We appreciate the outpouring of condolences and sympathy and ask that our family be allowed time to grieve and mourn his loss. We will announce plans for a public memorial shortly."

Pryor, who would have turned 61 on Oct. 20, was best known for his two knockout victories against the late, great Alexis Arguello. Pryor, however, had a career about more than just those two famous fights.

A superb puncher with speed and skills, Pryor had a standout amateur career highlighted by a win against all-time great Thomas Hearns in the 1976 National Golden Gloves finals.

Pryor turned professional after just missing out on a berth on the famed 1976 U.S. Olympic team when he lost to eventual Olympic gold medalist Howard Davis Jr. in the Olympic trials.

Born in Cincinnati in 1955, Pryor was managed by Cincinnati businessman Buddy LaRosa, who made a fortune as a pizza restaurant owner. Fighting primarily in Cincinnati and the surrounding region, Pryor raced to a 24-0 record by mid-1980. Then he got a shot at 140-pound world champion and future Hall of Famer Antonio Cervantes at the old Riverfront Coliseum in Cincinnati.

Pryor delivered big-time on his potential. He survived a knockdown in the first round and went on to stop Cervantes in the fourth round to win the WBA version of the junior welterweight world title. Then, in his sixth title defense, he met Arguello, the Nicaraguan legend to whom he will be tied for eternity.

Arguello was attempting to win a world title in a then-unprecedented fourth weight division when they squared off on Nov. 12, 1982, at the Orange Bowl in Miami, where he and Pryor delivered a fight for the ages. It is considered one of the greatest fights in boxing history. In the end, Pryor outlasted the fading Arguello in an electrifying 14th-round knockout victory, the biggest of his career.

There was some controversy surrounding the knockout because between the 13th and 14th rounds, trainer Panama Lewis (later banned from boxing for removing padding from Luis Resto's gloves before a fight in 1983) was caught on HBO's broadcast telling the cutman to give him the water bottle -- "the one I mixed." It has never been determined what was in the bottle Lewis was given, but whatever it was, Pryor went into the 14th round seemingly rejuvenated.

After a third-round knockout win against Sang Hyun Kim in his next defense, Pryor defended the title against Arguello in a rematch on Sept. 9, 1983, at Caesars Palace in Las Vegas. In another action-packed battle, Pryor had an easier time, this time knocking out Arguello in the 10th round. After the fight, Pryor announced his retirement, but it was short-lived.

He returned nine months later and was awarded the newly-created IBF junior welterweight title, which he defended in a 15- round decision against Nick Furlano. Pryor then defended the belt against Gary Hinton in what would be he his final world title bout in March 1985.

Pryor was struggling with drug addiction and was eventually stripped of the belt for inactivity. He would fight only four more times, including suffering his only defeat in his next fight, a seventh-round knockout to journeyman Bobby Joe Young in August 1987 in Fort Lauderdale, Florida.

Still dealing with a drug addiction that caused him legal problems, as well as eye injuries such as cataracts and a detached retina, Pryor won his final three bouts against low-level opposition on small cards before retiring in 1990.

Throughout Pryor's career, there were discussions for megafights against such star fighters as Sugar Ray Leonard, Roberto Duran and Ray "Boom Boom" Mancini, but they fell through for various reasons.