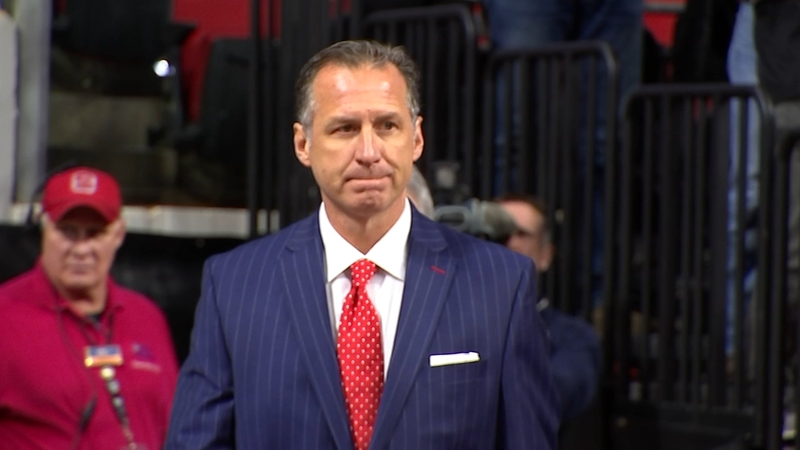 Just like the school that once employed him, Mark Gottfried is going on the offensive against the NCAA as it relates to charges that Dennis Smith Jr. was paid $40,000 to attend N.C. State and play basketball.

Gottfried and his attorneys, Scott Tompsett (a specialist in NCAA infractions cases) and Raleigh-based Elliott Abrams filed a 41-page response to the NCAA's Notice of Allegations. In it, they detail four main arguments for Gottfried's innocence as it were.

First, that the NCAA, in its filings and in public statements by officials, have "pre-judged" Gottfried, now the coach at Cal State Northridge, to be guilty and as such, he's been given no fair opportunity to rebut the charges.

They also argue that this presumed guilt is based on information that their own rules prohibit them from considering. Since Adidas executive Jim Gatto is appealing his guilty verdict in the FBI's case against him, Gottfried's attorneys say that the testimony about Smith's recruitment and payments shouldn't be admissible in the NCAA's case against their client.

"Ultimately, the NCAA is a powerful entity and Gottfried is just a coach. By announcing a public decision of guilt before allegations had been issued, in clear violation of NCAA Bylaws and general conceptions of due process, and by basing this public announcement of predetermined guilt on information that the NCAA is barred from considering, the NCAA has indicated that facts and rules matter less than appearances. Although we hope the Committee will do its duty to consider only facts appropriately presented to it, the history of this case strongly suggests that the outcome of this proceeding has already been determined-on the basis of improper evidence no less."

Secondly, as in N.C. State's response, Gottfried's attorneys maintain that there is no hard evidence of the payments being made, only testimony hinting at such a plan. Absent that evidence, they argue, Gottfried shouldn't be held accountable.

"More specifically, the finding of guilt as to Count One does not establish as a fact that (Adidas consultant T.J.) Gassnola actually paid $40,000 to (former N.C. State assistant coach Orlando) Early, or that Early actually told Gassnola that he intended to provide this money to basketball trainer (Shawn) Farmer, or that any of the other information related to this payment or to NC State more generally. The only charge that mentions NC State is Count One, the conspiracy count, which also lists three other universities. Because the jury merely had to find that an agreement existed to defraud "one or more universities," the jury verdict does not establish that the jury found as a fact that NC State was one of the universities that the jury determined the defendants agreed to defraud. And, of course, even if one were to speculate that the jury found that NC State was the target or one of the targets of the conspiracy, the jury never found that any conduct related to NC State actually occurred-since it is immaterial for a conspiracy charge whether or not the purpose of the conspiracy was accomplished."


Third, Gottfried's attorneys argue that he did everything reasonably possible to promote and ensure compliance both in general and specifically during the recruitment of Smith. They say he checked in frequently and "monitored" assistant coach Early and the Smith family and determined that everything seemed on the up and up. Gottfried, they posit, couldn't have known that Adidas representatives were running a covert "black ops" recruiting scheme that paid players to attend Adidas schools such as N.C. State.

"Only through an extensive, expensive, multi-year federal investigation involving numerous FBI agents, including undercover agents engaged in a long-running sting operation, as well as the use of wire taps, search warrants, grand jury subpoenas, offers of tremendous sentencing leniency in exchange for the cooperation of co-conspirators, including Gassnola, was the federal government able to uncover the scheme."

Lastly, Gottfried's attorneys say that given the scope of the investigation, they haven't been provided enough time to build his defense. Their request for an extended deadline to respond was denied by the NCAA.

One fun side note: In addition to the volume of documents involved and their case workload, the fact that one of the attorneys involved went on paternity leave was cited as a reason for an extension. Everyone loves a newborn.
Report a correction or typo
Related topics:
sportsraleighncaanc state wolfpack
Copyright © 2021 WTVD-TV. All Rights Reserved.
TOP STORIES
TIMELINE: NC weather could include severe storms today
Photos released from Raleigh Juneteenth shooting
LATEST: Nursing home deaths jump 32% in 2020
1 injured, hospitalized in Durham home invasion
Child tax credit: Will you be getting monthly payments?
Republicans ready to block elections bill in Senate showdown
Task force aims to save Outer Banks highway from flooding
Show More
NC troopers to beef up patrols on I-95
Ways you can save money next time you rent a car
Low-wage tenants join in on Raleigh's Moral Monday rally
Old JCPenney store in North Hills undergoing a transformation
Wake Forest police search for armed man after woman stabbed
More TOP STORIES News