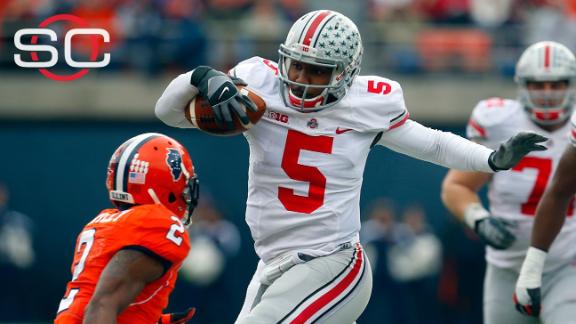 And then there were two.

Ohio State senior Braxton Miller has bowed out of the Buckeyes' three-man quarterback competition and plans to focus on playing wide receiver in his final season of eligibility, Miller told Sports Illustrated on Thursday.

Miller said he started preparing to play wide receiver this spring in case he wasn't healthy enough to compete at quarterback after suffering a pair of shoulder injuries. He missed all of the 2014 season after undergoing shoulder surgery last August. Miller watched film of receivers such as DeVier Posey, Antonio Brown,Odell Beckham Jr.and Cris Carter with coach Urban Meyer and snuck into the practice facility late at night to run routes with fellow quarterback J.T. Barrett during May and June.

He decided he will spend 80 percent of his time working as an H-back during Ohio State's August training camp and the other 20 percent with the quarterbacks.

"For the most part, it's going to be H-Back and punt return," Miller told SI's Pete Thamel on Thursday. "It's a long process to get back totally to throwing and throwing every day. This is the smarter thing for right now. God blessed me with a lot of talent and different opportunities. I'm going to have fun with that and still score a lot of touchdowns and help the team out and be dominant at that."

For all of Miller's certainty about the plan to switch to receiver while keeping his quarterbacking sharp in workouts, Meyer denies that he has made a final decision.

"I haven't made those decisions yet," Meyer told The Columbus Dispatchon Thursday night. "It's a little bit jumping the gun here. Braxton came to see me. He's been talking to me about it. We've been working at it, but I'm not ready to say exactly how we're going to use him yet."

Many speculated that Miller would spend his fifth year of college football with another team after his replacements -- Barrett and senior Cardale Jones -- performed well enough to lead the Buckeyes to a national championship last fall. Miller maintained throughout the year that he would finish his career in Columbus, Ohio.

Before the injury, Miller won back-to-back Big Ten offensive player of the year awards in 2012 and 2013. He started 34 games in his three years running the Buckeyes offense, accounting for 8,346 total yards and 84 touchdowns as a dual-threat quarterback. He was a preseason Heisman Trophy contender before going down in last year's training camp.

His move to wide receiver gives Ohio State's offense (ranked fifth in scoring in 2014) another explosive athlete on the field and helps make a seemingly impossible decision slightly easier for Meyer. Now, the coach only has to choose between a Heisman Trophy contender (Barrett) and an undefeated national champion (Jones).