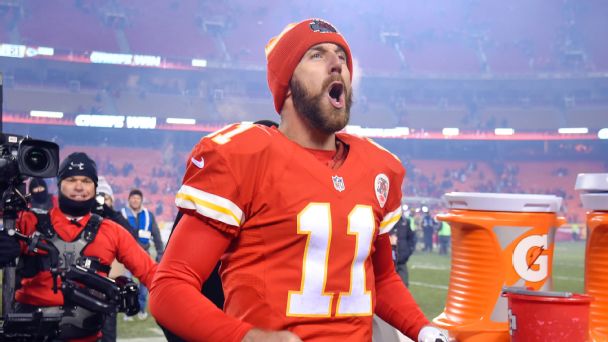 Normally, our Football Power Index delivers information in degrees: a percentage chance of this and the likelihood of that. That's the responsible approach to take with a model like this one. But on the precipice of the NFL season, we're throwing caution to the wind and letting FPI deliver predictions with stone-cold certainty.

Of course, keep in mind that in order to do this exercise, we're taking the information that FPI is giving us and then making a leap toward the black and white. FPI does not feel 100 percent certain about anything -- there's a 3.1 percent chance the Patriots will miss the playoffs, after all -- but we'll pretend, for a minute, that it does.

For what it's worth, the 50 percent marker is not special here, either. Some of these predictions are less than 50 percent likely to occur, but that's because they may be the most likely scenarios of possible options or simply because this is, after all, a story about bold predictions. Anyone can guess that the Browns will be bad.

1. The Chiefs will win the AFC West

In a tightly packed division, FPI has decided to push its chips to the middle of the table on ... quarterbackAlex Smith?

Right off the bat, this is one of those predictions that comes with a caveat. In this case, FPI thinks there is only a 38.5 percent chance that Kansas City will win the AFC West, though that is the highest in the division.

Regardless, FPI is hitching its wagon to Kansas City. It may not be the sexiest team to pick, but that is why the Chiefs are so often overlooked. There's plenty of preseason hype for Oakland's offense and Denver's defense, but we shouldn't forget about Kansas City's ... special teams.

That's right, the Chiefs have an edge in special teams, and FPI knows it. And this isn't just about what Tyreek Hill did last year, either.

Since 2013, when well-respected coordinator Dave Toub arrived in Kansas City, the Chiefs' special teams have twice been ranked as the best in the league by ESPN's unit efficiency metric, and finished no worse than fifth the other two years. As a result, FPI projects Kansas City to hold a 0.6-point advantage (best in the league) over the average NFL special-teams unit.

Of course, special teams can only get you so far. But the Chiefs' best characteristic is the lack of a unit weakness. All three parts of their team are projected to be above average.

Yes, even the offense. Smith is a little underrated, too. As much as fans criticize Smith's dink-and-dunk style, he's coming off of a season in which he finished 11th in QBR.

2. The Panthers will return to the postseason

Granted, FPI thought Carolina would walk into the playoffs last year, but then again, who didn't?

Cam Newton unquestionably regressed last season, but the model looks at the Panthers' franchise quarterback with a wider lens. Newton has been solid in the past, and 2016 appears to be the outlier. While not specifically a factor in FPI, the addition of rookie running backChristian McCaffrey ought to help lessen the burden on Newton. No team recorded fewer receptions by running backs last season than the Panthers, and McCaffrey adds a receiving dimension to their backfield.

FPI sees the Panthers as being a jack-of-all-trades team in 2017: decent at everything, exceptional at nothing. Sort of like the Chiefs, but not quite as good.

The chance of this prediction hitting, per FPI, is 45.9 percent, though the model considers the Panthers the 11th-most likely team to reach the postseason.

ESPN's Brian Burke noted recently that the expected-points-per-play difference on Cowboys' rushing attempts with Elliott on the field amounts to about 1.1 net points per game. That's significant, but not enough to hold back Dallas' prolific offense out of the postseason.

FPI doesn't specifically factor Elliott's suspension into its calculation, but that is a factor in the Vegas win total (and the cut taken by the sportsbook, also known as the vig), which is an input for FPI.

As much of a factor as Elliott was in his rookie season, an excellent running back's value pales in comparison to an excellent quarterback's value. And the Cowboys have both.

Nary was a good word said about Dak Prescott last year without mention of Elliott or Dallas' offensive line, but the then-rookie QB finished the 2016 season ranked third in Total QBR -- a statistic that divides credit between the quarterback and his teammates.

The Cowboys are in excellent hands with Prescott under center, regardless of who is at running back, and FPI believes they will win the NFC East even if Elliott's suspension is upheld at six games.

4. The Broncos are no longer a good football team

While Denver missed out on the postseason last year, the Broncos were still widely considered a very solid squad. Those days are over.

FPI projects Denver to win just 7.7 games in 2017, thanks to a lackluster-at-best offense.

While the Broncos' 2015 team proved it could win despite poor quarterback play, it is still an exceptionally difficult task to accomplish. With Trevor Siemian under center again, the defense will have to be just about perfect, and FPI isn't quite as optimistic about the Denver defense this year -- ranking the unit seventh-best in the league.

5. The Jets will draft another quarterback from USC

Just because it didn't work out with Mark Sanchez doesn't mean they shouldn't try again.

Believe it or not, FPI actually thinks the Jets are even worse now than last week, when we notedthat the model thought they were particularly terrible.

FPI believes the Jets are the heavy favorite (32.8 percent) to land the No. 1 overall pick, and fortunately for Gang Green, a quarterback is atop Todd McShay's recently released list of the top 32 players in the 2018 draft. Yes, USC's Sam Darnold could be the next savior in New York. Get those "Broadway Sam" headlines ready.

But that has almost nothing to do with any potential weakness the Patriots may have.

So why not project the Patriots to win 14 games, as they did last season? There's just too much variance in the NFL. FPI thinks New England has the best offense in the NFL, the second-best defense (behind the Giants) and the fourth-best special teams. So it would, frankly, be hard for the Patriots to be better. Even given all that, the model projects the Patriots to walk away with, on average, 11.8 wins. That's more than a whole win more than any team has been projected by FPI to earn in the last three preseasons.

A 12-4 record might not live up to the lofty expectations of the fans in Foxborough, but it would almost certainly win the Patriots the AFC East.

7. The Titans will win the AFC South

QB Andrew Luck's shoulder appears likely to keep him out Week 1, and it might keep the Colts out of the playoffs, too.

Uncertainty around Luck's health is a big reason why Indianapolis has handed the division-favorite mantle to Tennessee, despite the Titans being barely better than an average NFL team. Then again, being average in the AFC South is all it really takes.

Marcus Mariota has already demonstrated he is a good quarterback (64.9 QBR last year), and now the Titans have added receivers Corey Davis and Eric Decker, who ought to help Tennessee take advantage of Mariota's skill. FPI believes Tennessee's offense will be 1.1 points better than average.

8. The Dolphins were never going to the playoffs in 2017, no matter the QB

They finished the year ranked 25th in FPI and 16th in overall efficiency. And they had a negative point differential. Yet, somehow, they squeaked into the postseason.

So no, FPI wasn't going to pick them to make the playoffs again with Ryan Tannehill as quarterback. And FPI won't pick them to make the playoffs with Jay Cutler either. It's not that the model thinks Cutler will be awful, it's just that he'll be at about the same level as Tannehill, maybe a tad worse -- and that, frankly, is not good enough to get this team to January.