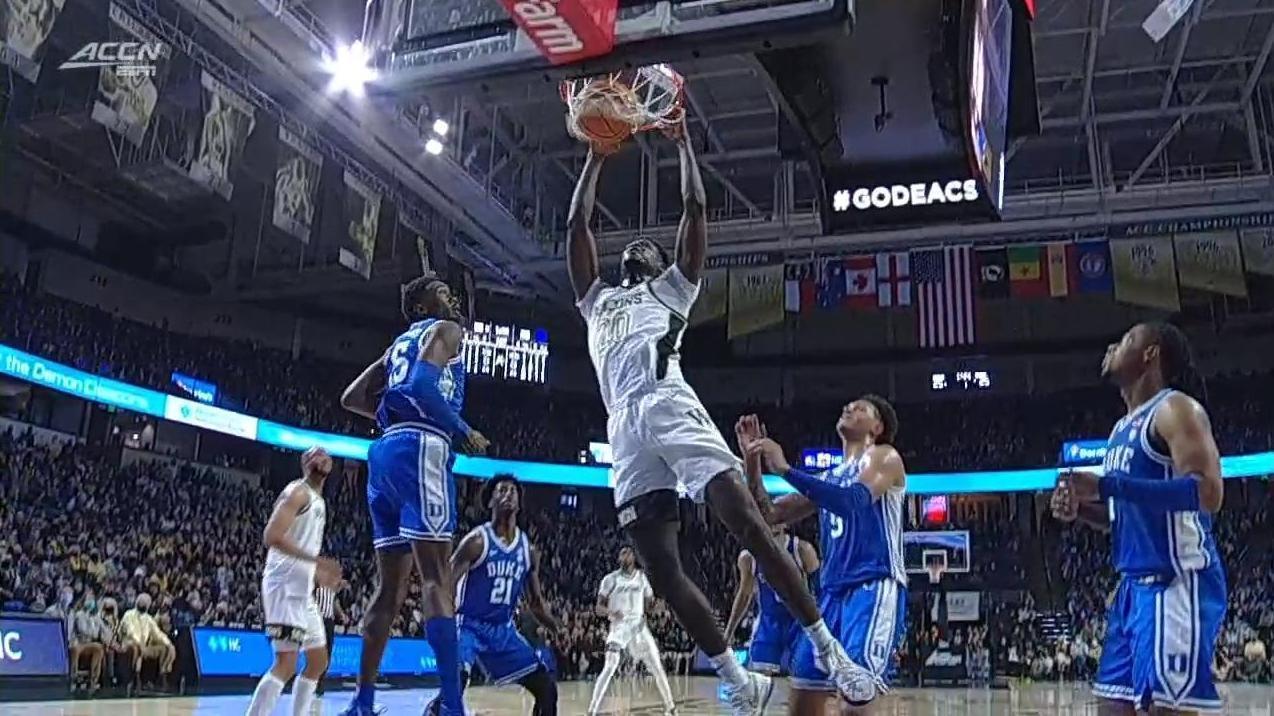 WINSTON-SALEM, N.C. -- - Duke labored through two games with shaky shooting and turnover-prone play since returning from a COVID-19 outbreak.

This time the eighth-ranked Blue Devils got their offense rolling behind a blossoming freshman and an opportunistic defense - all without Hall of Fame coach Mike Krzyzewski on the sideline.


Paolo Banchero had 24 points and Duke hit 13 straight shots spanning halftime to blow it open and beat Wake Forest 76-64 on Wednesday night, turning in its best stretch of play since returning from a stoppage that included two postponed games.

Fellow freshman A.J. Griffin had a season-high 22 points in his first start, the next steps in his growth after missing the majority of the past two seasons in high school due to injury. That helped the Blue Devils bounce back from a weekend home loss to Miami, along with securing a win while Krzyzewski was out with what the school called a "non-COVID-related virus."

"I think there was a lot of motivation coming off that Miami game with things that we can do better," Scheyer said.

Banchero and Griffin led the way as the Blue Devils (13-2, 3-1 Atlantic Coast Conference) suddenly stretched out a two-possession lead in the final minute of the first half - then carried a scorchingly hot hand into the second that wobbled the Demon Deacons (13-4, 3-3).

"It felt like kind of how we played at the beginning of the season," junior Wendell Moore Jr. said. "It was a lot of fun - guys sharing the ball, a lot of guys smiling. you're not even knowing who's scoring. You just know Duke's scoring."

Griffin ended the first half by pump-faking Khadim Sy off his feet and then stepping over to knock down a corner 3-pointer just before the horn for the 35-29 lead.

"That 3 that they hit at the end, it was a big shot for them," said Wake Forest's Jake LaRavia, who had all 14 of his points in the second half after battling early foul trouble. "... And it kind of carried over."

The Blue Devils made their last four shots of the first half, then roared out of the break by making their first nine shots amid a 22-1 run.

Alondes Williams scored 25 points for the Demon Deacons, who had the Blue Devils in a tight game coming down the first-half stretch and led 29-27 on Dallas Walton's and-1 dunk with 54.1 seconds left. But the Demon Deacons erased a stretch of quality minutes with a shaky finish - namely a throwaway leading to one 3, an offensive foul leading to Griffin's end-of-half one - to jumpstart Duke's landslide of made shots.


Wake Forest made just 2 of 16 3-pointers while committing 15 turnovers, leading to 22 points for Duke.

"You've still got to play the way you're taught and the way we've been playing all year long," Demon Deacons coach Steve Forbes said. "And I thought Duke had a lot to do with speeding us up and maybe letting the physicality of the game bother us a little bit with our ballhandling."

Duke: The Blue Devils had returned from their stoppage by shooting a season-low 37% in the win against Georgia Tech, then committed a season-worst 17 turnovers in the Miami loss. Along the way, Krzyzewski said it would take time for the Blue Devils to rebuild their conditioning to full-go game shape. This time, Duke shot 61% after halftime and 51% overall while also making 7 of 15 3-pointers.

Wake Forest: Forbes has brought a spark in his second year with the program after years of struggle, and it showed here with a loud home crowd - including a full and rowdy student section commonplace for the Chris Paul era in the mid-2000s. The Demon Deacons gave reason for the buzz by erasing an early eight-point hole and getting into a tight game, only to see this one unravel just before halftime.

The 6-foot-6 Griffin had been averaging 7.3 points, but he has now hit double figures in four straight games.

"I was just prepared really, either way," Griffin said of getting ready for his first start.

Scheyer, who coached a game last season when Krzyzewski was out due to quarantine protocols, said he had a quick FaceTime call with Krzyzewski immediately after the win.

"It wasn't a different outlook," Scheyer said. "It was: you better win or that call to Coach K afterwards isn't going to be fun."

Wake Forest: At Virginia on Saturday.