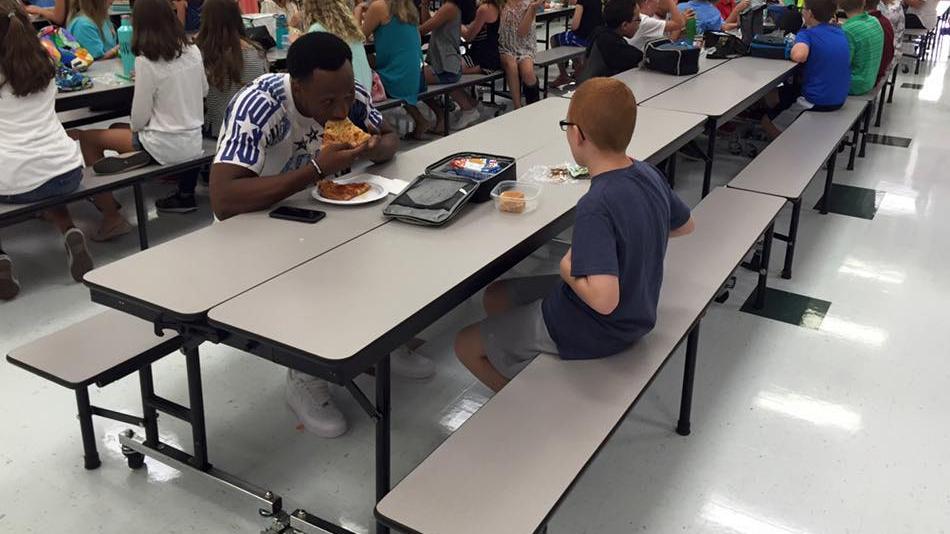 ESPN
By Jared Shanker
TALLAHASSEE, Fla. -- Between classes, football meetings and practice and interviews previewing No. 4 Florida State's game against No. 11 Ole Miss on Kickoff Week, a handful of Seminoles players found time to impact the lives of neighborhood children and parents.

On Tuesday afternoon, the mother of a child on the autism spectrum posted a Facebook picture of FSU junior receiver Travis Rudolph eating lunch with her son at Montford Middle School in Tallahassee. Leah Paske wrote that most days her "super sweet child" eats alone.

Rudolph said he saw Paske eating alone and asked if he could join him.

"I asked if I could sit next to him, and he said 'Sure, why not?'" Rudolph said Wednesday. "I just felt like we had a great conversation. He started off and was so open. He told me his name was Bo, and how much he loves Florida State, and he went from there."

Rudolph said Bo was a "really warm person," and Bo didn't initially recognize him as an FSU football player.

A cousin of former NFL player Devin Hester, Rudolph said he remembers the feeling when he'd come across college or NFL players as a child.

"I was just a kid not too long ago, and I remember what the impact was of guys that played in college and in the NFL coming back to us," Rudolph said. "So I feel like maybe I can change someone's life or I can make someone a better person or make someone want to be great or be like me, or even better."

"That's the way you affect people -- make somebody's day by being yourself, and going and spreading the word and understanding the impact you have as an athlete and role model to people in the community," Fisher said Tuesday. "You can change someone's life positively or negatively. It's your choice and I'm very proud. Our guys love doing it."

Rudolph's gesture made the Paskes fans for life, Leah wrote.

"Sometimes I'm grateful for his autism. That may sound like a terrible thing to say, but in some ways I think, I hope, it shields him," Leah Paske wrote.

"I'm not sure what exactly made this incredibly kind man share a lunch table with my son, but I'm happy to say that it will not soon be forgotten," she wrote on Facebook. "This is one day I didn't have to worry if my sweet boy ate lunch alone, because he sat across from someone who is a hero in many eyes. Travis Rudolph thank you so much, you made this momma exceedingly happy, and have made us fans for life!"