Game between White Sox, Orioles postponed due to safety concerns 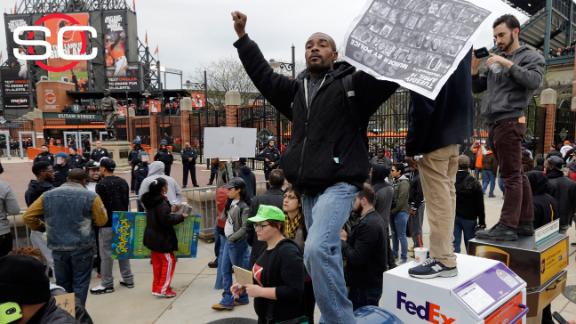 BALTIMORE -- The Baltimore Orioles' home game against the Chicago White Sox was postponed Monday night because of safety concerns after riots broke out near Camden Yards following the funeral of Freddie Gray.

Major League Baseball commissioner Rob Manfred, at the stadium for a previously planned visit, said Tuesday night's game between the Orioles and White Sox could be moved -- possibly to Nationals Park in Washington -- if safety continued to be an issue.

Manfred, in an appearance on ESPN Radio's Mike & Mike, said a decision on the game likely will be made Tuesday morning.

"We talked late last night," Manfred said Tuesday. "I was on the phone with [Orioles owner Peter Angelos] after I got back to New York, and it just did not make sense last night to make a decision on today's game. The situation was so fluid, it was developing as we were talking. We decided it was most prudent to wait."

Rioters looted stores and threw rocks and bricks at Baltimore police about 3 miles from the stadium in the wake of the mysterious death of Gray. He died April 19 after suffering a severe spinal injury in police custody. The Baltimore mayor's office said Tuesday there were 144 vehicle fires, 15 structure fires and nearly 200 arrests in the unrest.

The Orioles announced the postponement about 40 minutes before game time. About 1,000 fans were inside the stadium at the time, and many gates already had been closed.

"I think I can speak for all of us; it's a little scary," White Sox outfielder Adam Eaton said. "You never want anything to happen to anybody attending a baseball game, on the playing field or anybody in the city. We don't really want to tangle with that or put anybody in danger, so I think it's the best from everyone's perspective to cancel the game and hopefully the police officers and officials can get the situation under control."

Orioles players, having already received word of the postponed game, were seen driving away from the players' parking lot starting around 45 minutes before the scheduled first pitch. White Sox players were escorted back to their hotel by police officers.

"We completely understand this important decision to err on the side of caution and not play tonight," White Sox general manager Rick Hahn said Monday. "We're working with Major League Baseball and the Orioles to find the safest and most effective way to reschedule tonight and figure out what to do with the rest of the series."

The Orioles said the game was called off after consultation with police. The White Sox were in Baltimore for the start of a three-game series.

"We feel like we made the decision that would provide us the greatest possible security in terms of protecting the fans, the players, the umpires, everybody involved in the game," Manfred said Monday. "I don't know what more I can say about it at this point."

Baltimore police and city officials initiated a curfew that will begin at 10 p.m. Tuesday and last until 5 a.m. Wednesday. If the White Sox-Orioles series is not moved to a different location, a source has indicated that to counter the curfew, Tuesday's game could be played before 7 p.m., but not earlier than 4 p.m.

Before Monday's scheduled game, Orioles players gathered around a television in the clubhouse and watched the violence unfold. Police blocked off several streets near Camden Yards.

"There's so many things that go on that you get challenged with; obviously this is a different level," Orioles manager Buck Showalter said. "There's not a lot of experience with it.

"So you try to take each moment as it comes, and I know there were a lot of calls to some guys' families about making sure they knew what was going on from a safety standpoint. But guys are watching it. They are all aware of what's going on."

"I mean, we're definitely keeping tabs on it. If there's anything to do, to go ahead and respond to it. But you know, it's concerning to anybody, I think, any time it becomes a violent protest, everybody is on high alert and you're trying to do what's best for the game and the players," he said.

There was no immediate word on a makeup date for Monday's game.

Showalter said he would meet with Angelos in the morning to discuss options.

With games scheduled for Tuesday and Wednesday of the current series, Manfred said Monday that a venue change remains a possibility.

The Nationals, whose ballpark is approximately 38 miles from Camden Yards, currently are playing the Braves in Atlanta.

"At this point we're looking at every possible alternative in terms of completing the schedule in a timely way and making sure the games are played in a security situation that is safe for the fans," Manfred said Monday. "We're going to look at every alternative at this point."

Major League Baseball has postponed and shifted games in the past because of unrest.

In 1992, the Dodgers had four games postponed in Los Angeles following the Rodney King verdict.

In 1967, the Orioles and Tigers had a game postponed because of riots in Detroit. The next two games were shifted to Baltimore.

Information from The Associated Press and ESPNChicago.com's Doug Padilla was used in this report.