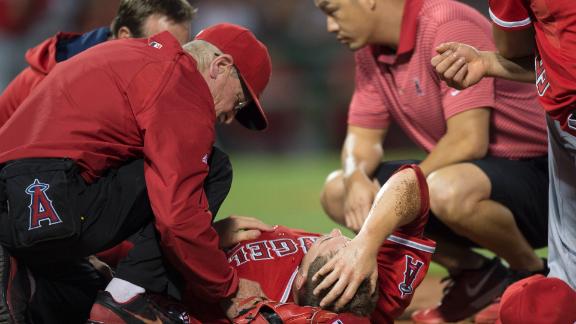 BOSTON -- Angels pitcher Garrett Richards is scheduled to fly back to Los Angeles on Thursday to be examined by team doctors for what manager Mike Scioscia called a "significant injury" to his left patellar tendon.

Richards sustained the injury Wednesday night against the Red Sox while covering first base in the second inning. First baseman Albert Pujols had fielded a ground ball by Brock Holt and thrown to second for a force play with Boston runners on first and second. Richards never made it to the bag, as he fell to the ground, clutching his left knee in pain.

"Obviously he's very distraught," Scioscia said after the Angels' 8-3 win. "He knows that it's not good, and we'll get some direction from our medical staff."

Scioscia refused to speculate on whether Richards is lost for the rest of the season, but teammate Jered Weaver said a tearful Richards, before he was taken to Massachusetts General Hospital, was told in the trainers room that he might require surgery. A torn patellar tendon almost always requires surgery and involves a recovery of at least three to six months.

"When I saw him go down," said Angels designated hitter Mike Trout, who has roomed with Richards since they were together in Double-A, "I got sick to my stomach."

When Angels shortstop Erick Aybar took Pujols' throw at second, he pivoted and threw to third base in an attempt to get the lead runner, which drew the attention of the Angels in the dugout away from first base.

But Weaver said he then heard a scream coming from that direction, and he turned to see Richards on the ground, clutching his left knee.

"I was actually walking off and listening to him scream in pain," said Red Sox catcher David Ross, who was the runner forced at second. "I got pretty sick to my stomach, as you can tell. That's a grown man out there screaming. Not a good feeling."

Richards remained down for several minutes while all the Angels players on the field gathered around him at first base, and Red Sox designated hitter David Ortiz came out of the dugout and joined the group.

Richards lifted his right hand in acknowledgment as the crowd at Fenway Park quietly applauded.

The Angels, who on Monday took over sole possession of first place in the American League West for the first time since May 15, 2011, can ill afford to lose Richards, who took a 13-4 record and 2.53 ERA into Wednesday's game in what has been a breakout season for the 26-year-old right-hander.

Richards went into the game having struck out 100 batters in 100 1/3 innings since June 4 while posting a 1.79 ERA. Opposing batters went into the game hitting just .195 overall against Richards, tied with Seattle's Felix Hernandez for lowest average among AL qualifiers.

"Garrett's taking it hard," a somber Scioscia said. "This is a huge blow for him. The type year he was having, hopefully we're in a position where there won't be any long-term ramifications. That's what we're very hopeful there won't be. We'll see."

The Angels, who have won seven of their past eight games and are 18-13 since the All-Star break, have been getting exceptional starting pitching of late. They have limited opponents to three earned runs or fewer in 10 straight games and 22 of 31 since the break.

But at the beginning of the month, they lost starter Tyler Skaggs, who last week underwent Tommy John surgery, and they have used just six starting pitchers all season. After Wednesday's game, they optioned right fielder Brennan Boesch to Triple-A Salt Lake, and they are likely to call up two pitchers to fill in for Richards, the Los Angeles Times reported.

"We have a game tomorrow," Scioscia said. "We're going to go out there and hopefully put together enough good things to win a game. We're just going to take these games one inning at a time, one game at a time. When Garrett's spot comes up in the rotation, we'll obviously have somebody ready. We have to keep moving on."

Wednesday's win increased the Angels' lead over the Oakland Athletics to 1½ games, but closing out Oakland without Richards will be a formidable task.

"He was having a tremendous season. This was a crushing blow to him. Our thoughts and prayers are with him. Hopefully it doesn't turn out as [bad] as everyone thinks it is.

"We've got a great team. I think everyone will rally around this."

Angels Ace Carted Off Field
Garrett Richards suffered a knee injury in the Angels' 8-3 win over the Red Sox.