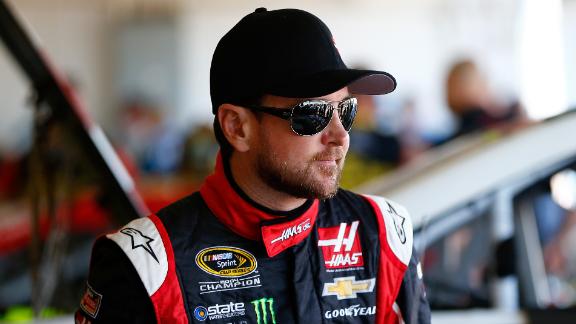 AVONDALE, Ariz. -- Gene Haas said Sunday he never wavered in his support of Kurt Busch in the aftermath of the controversy over whether Busch assaulted ex-girlfriend Patricia Driscoll at Dover International Speedway in September.

NASCAR suspended Busch two days prior to the Daytona 500 after a Delaware family court commissioner determined that Busch likely committed an act of domestic violence against Driscoll on Sept. 26.

Haas said his primary frustration over his driver's NASCAR suspension was the timing of the legal decisions.

"When he got pulled out at Daytona, that was pretty devastating. ... That was very upsetting," Haas said.

"NASCAR was very up-front with us. They told us everything that was happening. I think they had to react. The upsetting part is that we just had no control over those things. We had no control over NASCAR, over the media, over the court systems. We were just adrift in a boat going down a rapid river, and we just had no idea what was going to happen."

The Delaware attorney general's office announced March 5 that it would not seek criminal charges, citing the inability to prove the case beyond a reasonable doubt. In family court, when determining the protective order that Driscoll sought, the standard of proof is preponderance of the evidence, a less stringent level than in criminal court.

Busch, who has called the allegations a fabrication, was reinstated Wednesday by NASCAR and is eligible to make the Chase for the Sprint Cup despite missing the first three races. He finished in fifth place Sunday in the Sprint Cup race at Phoenix International Raceway. He started eighth and ran as high as second.

Haas said he never got to the point of having to decide whether to shut down the No. 41 car that he sponsors through his company Haas Automation Inc. Regan Smith drove the car for the first three races of 2015.

"I was always optimistic that things would work out, so I don't think I ever got to that point," Haas said. "Six months down the road, I probably would have had a different opinion. ... Things have kind of worked a little bit in our favor [now] even though they didn't work in our favor [initially]."

Haas started the fourth car at SHR specifically for Busch, the 2004 Cup champion who's considered one of the top talents in the sport while also battling behavioral issues throughout his career.

"He's razor focused," Haas said. "He's very focused on getting back to what he likes doing. I think he really appreciates what he has. He realizes that racing is a privilege and it can be taken away."

"We talked every few days just to see what was happening," Haas said. "We were all kind of waiting for something to occur so you can react to it. Kurt was always adamant that he was going to be cleared. He never varied on that.

"I believed him. He never said anything different from the first day all this occurred."

Haas also seemed to question the veracity of Driscoll's allegations.

"It's a real sensitive spot and there are a lot of women who do get domestic violence against them, so how do you know when this is actually occurring and when it's not?"

Haas said the companies who buy his machinery -- he has a billion-dollar business selling equipment that machines parts an pieces -- have not indicated to him that he should not keep Busch as his driver. A successful businessman, Haas also is starting a Formula 1 team.

Haas called the timing of the release of the commissioner's findings as "outrageous" that they would come out two days prior to the Daytona 500. NASCAR cited the opinion as the reason it suspended Busch.

Busch is appealing the ruling on the protective order. Kent County (Del.) Family Court Commissioner David Jones issued an opinion Feb. 20 that the preponderance of the evidence during the protective order hearing showed that Busch committed an act of domestic violence against Driscoll "by manually strangling her by placing his left hand on her throat, while placing his right hand on her chin and face and smashing her head into the wall of his motor home."

Busch contends that he cupped her cheeks with his hands and repeatedly asked her to leave his motorhome. The couple's four-year relationship had ended a week earlier.

The investigation into the allegations began in November (Driscoll reported it six weeks after it happened) and the hearing on the protective order lasted for two days in December and two more in January.

"It's been a tough couple of months here," Haas said. "We had no control over what was happening.

"So it was kind of like we had no idea which direction this was going to go. It just took so long for courts to make a decision, and if the courts would have reversed it where the attorney general [decision] came out two weeks earlier, it would have been a completely different story."