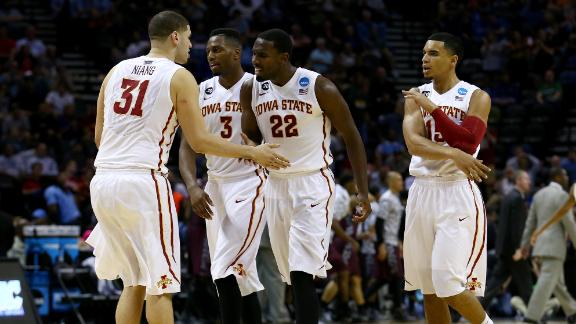 SAN ANTONIO -- Iowa State lost a key piece of its team while defeating North Carolina Central 93-75 on Friday night in the second round of the East Regional.

Sophomore forward Georges Niang suffered a fracture in his right foot during the second half of the third-seeded Cyclones' game and will miss the rest of the NCAA tournament.

"Adversity hit us tonight, and hit us hard," coach Fred Hoiberg said outside a solemn Iowa State locker room afterward. "We'll see what we're made of."

Niang is the Cyclones' third-leading scorer, averaging almost 17 points per game, and was playing his best ball of the season. He was a huge part of Iowa State's Big 12 tournament championship, and before heading to the locker room Friday with just more than seven minutes left in the game, he had already scored 24 points and grabbed six rebounds.

"This doesn't change anything with this team," Niang said. "I still believe in these guys. My role just changes from being on the floor to being their biggest fan on the sideline."

Coming into the NCAA tournament, the Cyclones were one of the hottest teams in the country. They continued their hot shooting against North Carolina Central, winning their fifth straight game, thanks in large part to Niang, who drained four 3-pointers.

But with Niang sidelined, the Cyclones have only six players left on their roster who average more than 6.2 minutes per game. And with No. 6 seed North Carolina looming Sunday, they don't have much time to prepare without him in the lineup, either.

"This is definitely a damper," Iowa State forward Melvin Ejim said. "It sucks.

"But now guys have to step to the occasion."