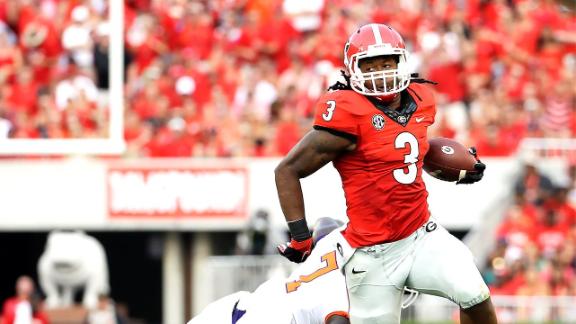 ESPN
ATHENS, Ga. -- Georgia's wait for a ruling from the NCAA on Todd Gurley's status continued into Tuesday as the No. 9Bulldogsstarted game-weekpreparations for rival Florida.

Georgia is nearing the three-week mark since Gurley, a star tailback who had been among the top Heisman Trophy candidates, was indefinitely suspended Oct. 9 while the school investigated allegations he received improper benefits for signing autographs.

"From the facts that we know today, publicly, Georgia's behavior has been commendable," NCAA president Mark Emmert said Monday. "They, apparently, saw something that concerned them, and they dealt with it directly and their athletic department seems to have handled that very, very appropriately based on what we know today.

"When a school has information about inappropriate behavior that might render a student-athlete ineligible, then they're under an obligation to respond. If it turns out later that they did know and did have facts that demonstrated that someone was ineligible and they played them anyway, then sure those wins can be vacated and that's happened many times."

Georgia filed paperwork with the NCAA last week to reinstate Gurley, who has missed two games. The Bulldogs were off last week and entered their normal practice schedule Monday to prepare for Saturday's game against the Gatorsin Jacksonville.

Gurley is practicing with the team, but not as a starter. That would change only if he is cleared to play by the NCAA.

"It's been stressful, of course, for the coaches and players and of course for Todd," senior defensive tackle Mike Thornton said after Monday's practice. "We have to continue preparing, and we have been. Guys just have to continue to step up like they've been doing."

Freshman Nick Chubb has thrived as the fill-in starter, easing concerns that a prolonged suspension of Gurley could end Georgia's hopes of playing for the Southeastern Conference championship.

"I feel like everyone was happy we did it without Todd, but if he comes back it's even better," Chubb said last week.

Chubb ran for a combined 345 yards with three touchdowns in the two wins.

"That's the thing about Georgia, we always recruit great players who can step right in if anything happens," Thornton said.

Chubb had a combined 68 carries in the past two games because Georgia was also missing injured tailbacks Keith Marshall(knee, ankle) and Sony Michel(shoulder).

When Georgia submitted its request for Gurley's reinstatement, coach Mark Richt said he hoped "for a relatively quick turnaround" from the NCAA. Richt also said "I have no idea how long it will take."

Richt said Georgia's game plan would be the same with Gurley or Chubb as the starter. The difference is Gurley would receive more snaps during practice if Georgia knew he had been cleared.

Gurley, a junior, has rushed for 773 yards with eight touchdowns and has averaged 8.2 yards per carry.