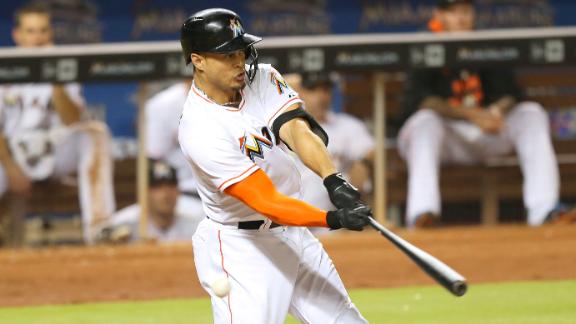 Major league home run and RBI leader Giancarlo Stanton hurt his left hand, grimacing in pain with his final swing in the ninth inning of the Miami Marlins' 7-1 loss to the Los Angeles Dodgers on Friday night.

The 25-year-old outfielder initially hurt the hand on a swing and miss in the sixth inning. He will have X-rays on it Saturday morning.

"My bat dug into my hand a little bit," Stanton told reporters. "It didn't feel the greatest. Just get checked out and then know for sure what's going on."

Added Marlins manager Dan Jennings: "They want to take a look at his hand or wrist. We'll see. I don't know anything right now. ...Hopefully, it's something he just tweaked a little bit in one of his swings."

Stanton's hand appeared swollen, and he said it hurt where he grips the bat. Asked whether he's concerned, Stanton said, "My concern will be when I know exactly what's up."

Stanton indicated the pain grew worse as the game progressed. He said the ninth-inning at-bat was "the icing on the cake."

Stanton, who finished 0-for-4 with three strikeouts, entered Friday night's game pacing the major leagues with 27 home runs and 67 RBIs.